Recently, I bought the Kindle. I had thought of buying various different readers, but eventually went with the Kindle because the Sony Touch was slightly more expensive and there has been some talk that the Touch isn't quite as sharp. I bought the smaller one because I can't picture having the larger screen without the ability to use a stylus to write notes. If I'd bought a larger screen ereader I would have gone with Sony's for that reason and its lower price. The Kindle, at $259. was the best price for an ereader that I trust.

The Good: When you use the Kindle for what it is built for it does an amazing job. It is the perfect replacement for paperbacks. The e-ink is crystal clear and it's not another glowing screen to wear out your eyes. You can adjust the font size and I did bump it up a size because of my eyes which were never so great and which have been worn out by too much staring at glowing screens; if you have younger eyes you may bump it down a size to get more on one screen. You can hold the tablet easily in one hand and click the button to change the page with your thumb. Personally, I suggest that you don't get one of the many covers which make the Kindle look like a book and will require you to use both hands like a book. It just works perfectly as a one hand device.

Prices at Amazon are generally very reasonable. Amazon held the line at $9.99 maximum for all e-books until recently. When Apple sold consumers down the river in order to get publishers to come to its bookstore for the iPad Amazon was forced to give ground. Still, I think the highest price I saw was $14.99 and I found a number of classic books, such as Blackstone, for $.99 (I even found Moby Dick available free of charge). Outside of Amazon, other companies can provide digital books which work on the Kindle through various formats. Some companies are reasonable about this and some are insane enough to think that I'll pay the price of a hardbound book even if they haven't paid for ink or paper or shipping or the profit the brick and mortar would have taken.

All-in-all, once ereaders come down to a reasonable price (they really should be $99 or lower), there will be no reason for anyone to buy a paperback anymore except sheer stubbornness. The only reason to buy hardbound books will be to have the book on a shelf to impress people.

The Bad: The thing I'm most upset about has nothing to do with Amazon. It has to do with legal publishers. This would be a good medium for legal trial books - the ones companies put out every year for practitioners to take to court with them so that they are able to make arguments on the fly. Specifically, I checked for Criminal Offenses and Defense in Virginia, The Law of Evidence in Virginia (usually called "Friend"), Police, Crimes and Offenses and Motor Vehicle Laws of Virginia (yearly selected codes for crime and traffic), and the Annotated codes (both Lexis and West). None of these were available. Neither West nor Lexis had any useful books which could be downloaded on the Kindle. Last year, West announced that it was putting 30 of its books out for the Kindle, but there wasn't a single one of them which was really of use.

The Other: PDF's don't work well on the Kindle; it shrinks them in size and can make them very difficult to read. I can't really complain about this because if I'd wanted full size I could have bought one of the larger ereaders.

I also can't use the wireless downloading of books, but this is not Amazon's fault. We just have very limited wireless service here in the mountains. I was able to get the wireless to work over in a town in Kentucky, but didn't download any books (just checked the internet). Not having wireless isn't all that bad, all you do is download a book from the Amazon site to your computer and transfer it via a USB cord.

The internet browser on the Kindle is primitive. It works about like a phone browser on a non-smart phone. If a site is optimized for mobile browsers the site is easily read; if the site isn't optimized for it (or has flash) it's just not going to work very well. Basically, you should be able to read well put together blogs and newspapers.

The MP3 player is basic. It works. It can also play music while you read books. My Creative Zen is more versatile and smaller, so I use it instead.

Versus the iPad: There have no shortage of stories predicting the death of the Kindle because of the coming iPad. At this point the Apple reality distortion field is in full effect, so it's hard to tell. The one actual bit of research I've been able to find indicates that the Kindle is actually doing better than the iPad. 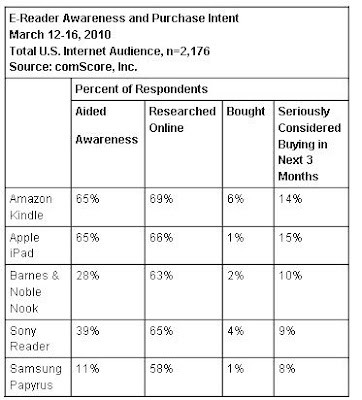 I wouldn't be surprised if this continues. I know that since I've started carrying mine their have been a lot of people showing interest in it and most of them are people I don't see buying an iPad (or any other tablet computer). My main hope is that the competition from multi-purpose tablets will drive ereaders down to where their pricing ought to be, perhaps $79.99 for the smaller and $124.99 for the larger unit. It'd also be nice if they finally went to color e-ink. I hope they don't try to change from single focus devices to multi-focus. If the ereader providers try to compete at that level they'll lose.

Conclusion: As something to read with, the Kindle is easily better than a paperback book. In the end, even at $259, it will pay for itself in money I save on books (assuming the current pricing scheme holds) in about 18 months, but it is really too expensive to achieve the level of market penetration it should be getting. If you can afford one buy it.

[addendum] cross posted - with some improvements at my office's blog "The Digital Office".
Author: Ken Lammers on 3/25/2010
Email ThisBlogThis!Share to TwitterShare to FacebookShare to Pinterest

I've had my Kindle for about a year now. As you say, it works very well as a replacement for paperback books. I rarely buy paper novels any more.

The higher book prices usually go down after the book has been out a while. However, be careful of certain specialized books, such as textbooks, that can cost $50 or $60 on a Kindle (as they do on paper).

Some older books appear to have been scanned in from paper copies and have a lot of weird artifacts -- words broken in funny places, mistaken letters, odd symbols.

As for PDFs, you might want to try downloading a free copy of the Mobipocket Creator software. It can read in a variety of different document types, including PDF, and spit out a Mobipocket document, which is basically the native Kindle format. The result is usually a lot better than trying to read PDFs directly on your Kindle.

I stopped using my Kindle once the Kindle app for the iPhone came out. Between the iPhone and the iPad, the Kindle will have to improve its features (touch screen, better internet usage) or it will be left behind in the dust.

Actually, I think the Kindle would probably do better to go the other way. Concentrate on staying a reading device and separate itself from the coming deluge of tablet computers by staying smaller, lighter and cheaper. Although e-ink could use some improvement (where's the color? - there were articles in 05 about color e-ink), the primary flaw is the price. If Kindle was less than $100 the iPad wouldn't even be a serious competitor.

I've had a Kindle (the original version) for a couple of years now. I bought it as a toy, and I'm delighted with it as just that. As you say, it does a fine job replacing the paperback (though I'm enough of a fogey to stick with those, too).

The real advantages I see are for travel (I've always got as many books as I could possibly want without the bulk or weight or need to find a place to restock) and for getting tons of public domain material for free.

That much said, and I know there are some out there who disagree with me, I think the Kindle is close to worthless for most serious reading - including the work we do as lawyers. Footnotes (or endnotes), even when they're actually optimized for the Kindle (which isn't always, alas) are a pain. The note taking and highlighting functions are remarkably clumsy to use. And if you're doing something where you need to make page references, you're stuck.

I've thought about getting the larger one for reading transcripts (I take my transcript notes on a legal pad), but I've looked at how they transfer, and it's not all that well.

As a Kindle owner I've discovered a few other irksome "features." My county public library system lends out books in a download-able format which is compatible with the B&N Nook's copy protection system, but there are no e-books on offer for the Kindle.

Unlike "real" books, you can't lend or borrow Kindle books to/from friends (or enemies), nor can you purchase used books for the Kindle.

None of that is really the Kindle's fault. It will take the unprotected .txt format and the .prc format. It's your library which is keeping you from getting the ebooks.