Why Do We Always Lose the Zombie Apocalypse? 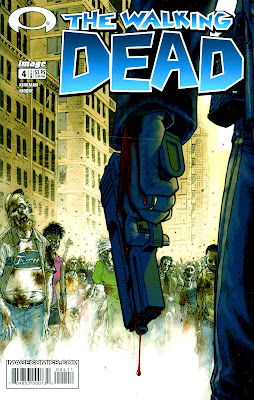 So, I was watching AMC's "The Walking Dead" when an important question hit me: How in the world did we lose to the zombie horde?

I mean, I get that there would be significant losses at the beginning. There would be initial losses of doctors and first responders before it got figured out. Then we'd all have warning. From that point a bunch of zombies stumbling along at one mile per hour should be pretty easy to handle.1

Of course, there will be greater casualties among liberals. Liberals would not have firearms to shoot the zombies in their heads as they closed in. As well, I figure San Francisco is just to be written off. As soon as the government starts to shoot zombies there will be massive demonstrations and rallies in San Fran in support of Zombie-Americans. Thousands upon thousands of tree hugging, tie-dye wearing, hippy types will throng the streets with signs decrying imperialistic capitalism oppressing our zombie comrades. Then, as the zombies start to encircle them, they won't run away because they want to show solidarity. Thus, there will be massive casualties and a ton of people who got away after just being bitten will turn and the zombie army will be too large for San Fran to be held. In the end the military will at least have to napalm the city to destroy the masses of zombies occupying the streets. The military's first instinct would probably be to nuke San Fran (just on general principals), but I figure some admirals may lobby to save the naval facilities.2

Beyond the liberals there would also be those who were just too sentimental to throw Aunt May out after she was bit. So, we'll lose a fair number of people just because they are compassionate.

And, while the police, firemen, gang-members and suburban NRA members are fighting the zombies in the cities, there won't be much of a problem in the rural areas and mountains because out there firearms aren't considered an option, they're considered an appendage. Your basic zombie starts walking down the street in Honaker, Virginia and I'm sure somebody is going to take care of it pretty quick. Heck, even without firearms a guy who works on a farm or in a mine is probably going to be proficient enough with hand held tools to run up on a zombie and kill it with a pick or axe or shovel or whatever else is handy. 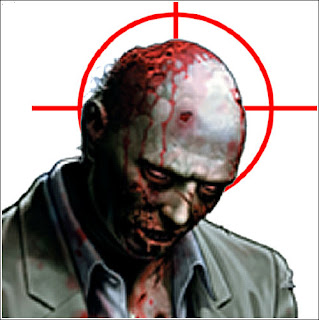 And, then there's the military reaction. You know, I was a REMF, M.I. guy and I was a good enough shot with my M-16 that I could have stood at the end of a street and shot a couple dozen zombies in the head (for some reason that's the only way to kill them) as they shuffled down the street toward me. I'm pretty sure soldiers in the combat units would do extremely serious damage to the zombies. Heck, with slow moving, easy shots, you might even be able to train sailors - and maybe even possibly airmen - to fight as though they are actually in the military. I give it six months, a year at the most, before the military has the situation entirely in hand.

Now, some of you are going think that a zombie apocalypse might not be such a terrible idea. There would be a huge drop in moonbats in the world (see San Francisco supra). However, this would leave us with no balance for the wingnuts. After all, the wingnuts are going to be the people out in compounds in the middle of Colorado with 10 firearms each and enough stocked food to last ten years (y'know, the ones the ATF & FBI haven't raided yet). Not sure I want to live in a world that unbalanced. Maybe if we could just contain the zombie outbreak to San Fran and NYC . . .


1 Yes, I realize there are some outlier movies wherein the zombies move fast, but that's just silliness. In any event, fast zombies would probably result in greater casualties, but not zombie victory.

2 This is not to say that all of California will be lost. I figure that L.A. will do pretty well. Heck, between police who aren't afraid to use force when they can and gangs which have kids holding territory on every street corner the zombies won't stand a chance.
Author: Ken Lammers on 12/30/2010
Email ThisBlogThis!Share to TwitterShare to FacebookShare to Pinterest

One, simple denial at first. These can't 'really' be the dead come back. So yeah, a lot of casualties to that one right there.

Two, panic, Soldiers will revert to prior training, muscle memory, which is shoot center mass. Waste of time against Zombies. At least we hope Solders would revert to training, it is the foundation of our current training methods.

Like you said, for six months the Zombies will probably be winning after a fashion. I also think their numbers would not go up as quickly as some think. Unless you rise up and join the horde almost immediately then those killed by zombies will more than likely be consumed, not turned.

Do we really need the far left to contain the far right though? Given we have a few far righties in the military already, but not that many far lefties, I think the moderate among us can keep them in check just fine.

Thank you, Ken, for being another voice of reason speaking out against the non-stop din of zombie alarmism. There's nothing wrong with encouraging vigilance against the ever-present menace of isolated Zombie outbreaks, but it's pure fear mongering to suggest that Zombies could ever become an existential threat to humanity. After all, we can always shoot them in the head.

I just want to believe our military and L.E. personnel would perform better than that while re-enacting the steam roller scene from Austin Powers with zombies.

Would zombies limping along at a half of a mile per hour really test the reaction times and critical decision making processes of those trying to stop them?

Just apocalypse for thought, maybe the whole premise of a zombie apocalypse is a parallel chaos to something more realistic.

I am a big zombie apocalypse fan and after reading the book one second after (about an EMP attack on the US), I came to a paralleling conclusion: what if the real zombie apocalypse we fear is one in which large sections of the population all at once loose the lives we are used to living? events would occur that would parallel a zombie apocalypse. Many people would feel lost separated from themselves and what once made them who they are. If they are at work they would be stranded away from home. If home, unable to travel, and if traveling, stuck in transit (EMP knocks out more than 99.999% of all vehicles that rely on electronic start). Large groups of people would take to the roads on foot as food shortages begin to occur (nearly all the population of the US relies on the "100 mile" diet). People would begin to group together: Communities, Religious preferences to include Cults. Every one would blame everyone else and above all, just want something to eat even some turning to cannibalism. In the end the "event" would be overcome, but at a great price. The population would balance out to the terms of supply and demand of food.

As much as I love the idea of world war Z, the displacement an EMP strike would cause would be far worse and more likely.

Despite the parallel, I agree that a real zombie apocalypse shouldn't be that hard to overcome... but what about airborne concerns per what happened in I Am Legend? even blood born/fluid transferred just look at how fast they claim the spread of Aids has been?! maybe in a zombie apocalypse we doom ourselves by the who chases who theory: necrophiliac or the zombie? in other words so and so is going to be a zombie at the end of the week but i am going to do it anyway.