I'm in the Paper

Do they concentrate on the case wherein my client's felony was reduced to a misdemeanor with six months to serve? Nope. They concentrated on this case: 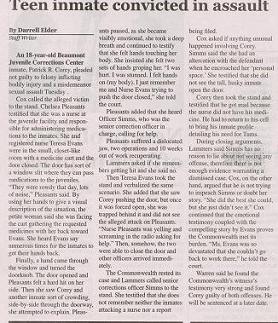 Actually, the guard testified that the 6 wards were in her sight the entire time (lined up next to the wall), that the door was in her sight the entire time, that the she never saw the door open, she never saw a ward enter the pill room, that she never saw an attack on the nurse, she heard the nurse call for a supervisor, and that the issue which they addressed was the fact that the nurse didn't give my client all the medication he was supposed to get. There was no "I don't remember" and no way she "didn't see it"; she was positive about what had not happened that day. Under questioning from the prosecutor, the guard testified that slightly prior to the alleged incident she had had a confrontation with my client. It wasn't relevant, but I let it go for use in closing argument as evidence that the guard had no reason to lie for my client; in fact she had reason to be biased against him.

An 3d party witness with reason to be biased against my client testifies it didn't happen.