1) If you are robbing a store in the middle of the night, and the owner returns, you may not want to hide under the owner's bed, drink some beer, and start snoring.

2) Why'd the robbery fail? Probably because the clerk was rolling on the floor laughing at the diaper the robber was wearing on his head.

3) If the last prosecutor asked the judge to dismiss charges as a favor for his secretary, Mr. New Prosecutor cannot revive them.

4) What kind of jerk steals a lady's wedding dress? 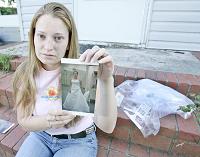 Melissa Hooper's bridal gown - shown in the photograph she's holding - was stolen recently from her car in Newport News. Her wedding veil, in the bag in the background , was found in the middle of the street.

6) If you go to the trouble of faking your death to get away from a federal drug investigation - don't have your wife renew your driver's license!!

7) Ummm . . . If I go get arrested, can I get bonded to a luxury super yaught too?
Author: Ken Lammers on 6/25/2006
Email ThisBlogThis!Share to TwitterShare to FacebookShare to Pinterest