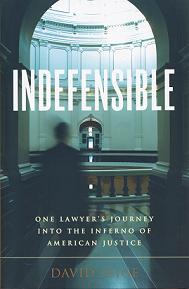 5: Touched by God - a work which makes Shakespeare look infantile
4: Amazing - Instantly began rereading it and quoting it to friends
3: Worth Every Penny - a solid, interesting read, inspiring some thought and discussion with people who share similar interests
2: I Paid For It So I Finished Reading It - Some interesting parts but if I lose the book I'm not buying another copy
1: Couldn't Force My Way Thru and Burnt the Book in order to send it to the Hell it deserves

I rate Indefensible a 3.7. More than worth the money I spent to purchase the book and it reveals a good deal of the universal feel of practicing criminal law while giving glimpses into the realities of New York courts.

Mr. Feige is also known for his blawg of the same name.

I have to make a couple of admissions before I go forward. First of all, I have already used the book as a way to tweak someone.

Second, David, while checking up on his publisher, offered me a copy of the book a while back. I didn't take him up on it because I wasn't sure how much I'd like the book and I knew I'd feel like pond scum if I was gifted the book and then panned it; it would be downright rude. Admittedly, I was concerned because I think that David and I are very different persons. He appears to be much more of a "true believer" than I am and I think I'm more along the line of those whom he describes in his book as believing in the system (at least as it should be). Keep that in mind as you read my review.

If you're expecting some sort of meta-story you will not find it here. The book barely follows its proclaimed "day in the life" narrative. It's more of a stream of consciousness exercise very loosely linked to the events of a single day. I found the format distracting. It often felt like reading the book was like talking to a slight schizophrenic who starts out to tell one story but tells twenty or thirty along the way because everything triggers a memory.

However, therein also lies the book's strength. Anyone who has read his blog knows that David has a talent for writing short, powerful pieces. He delivers the same in the book. While it may be an unexpected tangent when he veers off to discuss his first experience with an abusive judge or his first murder case, you are quickly sucked into each of the short stories. Each of the stories is interesting and well told. Perhaps the reason that the book's strength is in the little stories and not the BIG story is because that's what life as a criminal defense attorney is like. We deal with all the little stories, not the big ones. Day after day, individual after individual, every attorney accumulates a hodgepodge of little stories which attach themselves to the heart or head (or both). This book feels a lot like sitting at a table with a bunch of criminal defense attorneys listening to their free flowing war stories.

Reading this was like getting a glimpse at an alien planet. Criminal procedure in New York bears little resemblance to the way things are done down here in Virginia. However, I now understand why all the New Yorkers who come down here think I can snap my fingers and get them a continuance. From reading the book I get the impression that in New York if anybody just decides to carry a case to another date it gets continued. Here in Virginia, even the prosecutor needs a reason if he's going to get a continuance - it might be a reason I'd never get away with, but the prosecutor does have a reason. A second continuance for the defense requires the apocalypse and for the prosecution a solid reason. Continuances for a couple years are entirely foreign to me.

It also stood out that there were no officers present. I don't recall any part of the book wherein David is dealing with an officer, either interviewing him or cross examining him. I don't set foot in a courthouse without dealing with police officers. I suspect the difference is that they probably deal with things initially thru the police report. In Virginia the officers are scheduled to be in misdemeanor court at least once a month and the summons/warrants they issue are scheduled to be heard that day. For felony trials they are subpoenaed to be in court on the trial date. If I were brave enough to write a book such as this a good portion of it would be about the daily interaction with the police.

David's office is also much more of a social services office than I've seen anywhere. However, as he explains, they set out to make it an office of that sort. I also suspect that David, as a senior attorney, has more time than others in his office to devote to this sort of activity. My social services activities are mostly limited to fighting to get my clients in Pitcairn County and Shire City into court approved programs X, Y, & Z. I've tried to get people into other programs but the judges are extremely skeptical of those programs; there are programs which are acceptable in Richmond of which I've heard judges snort derisively when I suggest them in Pitcairn or Shire. Judges in more rural settings like Florin and Guilder counties won't even listen to any of this new-fangled, alternative programs nonsense.

The one point which floored me was when David described passing contraband (cigarettes) to one of his clients. It was a casual mention, as though it was just part of everyday business. Maybe it is up there. Down here, since I'm the only one allowed contact visits with my client it would be pretty easy to figure out where the contraband came from. Additionally, some jails make a point of searching Client after each visit; in fact, the regional jail where most of my clients are located does a strip search every time there is a contact visit. I don't know anybody who passes things to clients. I know it's happened. The local jail has banished at least one lawyer who passed something (never could get the full story); if you can't go into the jail it's mighty hard to meet with your client and prep. The regional jail went on high alert for 6 months after some idiot smuggled something in during a visitation. Consequently, every time we went to visit a client instead of the normal wanding or pro forma pat down the guards were searching our shoes, taking any paper clips in our files, and doing a "pat down" which meant the guard searching me knew more about my anatomy than some women I've dated. Not to mention I can't do much good if the Bar took my card and I don't have a real hard time envisioning the Virginia State Bar doing that.

We practice in different worlds.

On the other hand, some things are the same. Judges who were prosecutors before coming to the bench. The good relations which David has with corrections officers tracks with the type of relationship that those of us constantly in court develop with the deputies who run the building, and lockup, and the jail. The dread of getting a bad prosecutor and a bad judge on the same day. Getting pushed into deals you and your client don't want so you can get him out of jail. The homeless, helpless, frustrating clients whom you can't do much for as they cycle thru the system over and over again. The clients who call over and over again when there is absolutely nothing to talk about in their cases - as David points out, some of these can be humorous and some frustrating. The jailhouse lawyers. They're all there - just arranged differently.

Comments are enabled
Author: Ken Lammers on 6/02/2006
Email ThisBlogThis!Share to TwitterShare to FacebookShare to Pinterest