Lilyhammer: An American Mobster in Norway 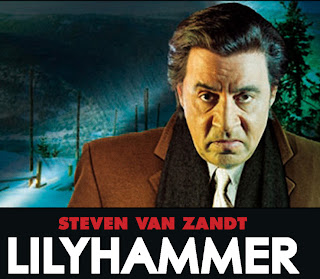 5 Second Review:  When an American mobster is hidden in Norway everything will go well, right?

30 Second Review:  An American mobster turns on his fellows (well, they tried to kill him first) and his only condition is that after he testifies he will be resettled in Lillehammer, Norway. Will he take over the whole country or just Lillehammer?

In Depth:  When the new boss tries to kill him, a high ranking mobster turns government witness on condition that he be resettled in Lillehammer, Norway.  He shows up in Norway where the government has given him a tiny row house, an electric car, and an invalid driver's license. He runs face first into an amazing level of bureaucracy and small town police. Being a mobster, he doesn't just sit around and take it; he starts to bend the entire system to his will.

There's a good bit of humor here which starts from goofiness surrounding the interaction between an Italian-American mobster and Norwegian society. However, there's also a dark humor which surfaces whenever someone gets in the way and when the Mob figures out where their turncoat is and sends a couple guys to take care of the situation.

Cons: This is not a show you can listen too in the background while you are doing something else. Unless you speak both Norwegian and English you have to read the captions at the bottom. I've watched all but one of the episodes and Norwegian may have replaced Arabic as my second best language. Also, this is only on Netflix, but everybody has Netflix by now so it shouldn't be too difficult to find.
Author: Ken Lammers on 2/12/2012
Email ThisBlogThis!Share to TwitterShare to FacebookShare to Pinterest