Line of Duty: A Review 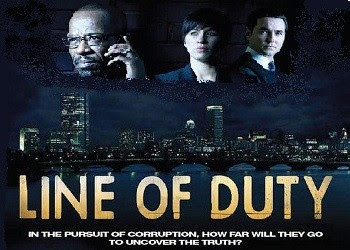 30 Second Review: In a police department rife with corruption, can its most celebrated officer be above suspicion? The leader of the anti-corruption unit doesn't think so.

Full Review: Lately Hulu has become the place I go to to find interesting shows which I would never see otherwise - usually shows from outside the United States or channels I'd never go to. Among the shows it has gotten me to watch are Little Mosque on the Prairie (Canadian: comedy about a mosque in a rural Canadian town : first three seasons are much fun), Rev (British: semi-comedy about a Church of England Priest "promoted" to become vicar of a failing church in the slums), and Teen Wolf (MTV: a serious and interesting take on the premise which is good enough that after I watched its first season on Hulu I unblocked MTV and watched a show on it for the first time in 20 years). Last week, I was flipping through Hulu and ran across Line of Duty.

Line of Duty has three main characters, but it centers around the story of Detective Chief Inspector Anthony Gates. Gates has been officer of the year for the last three years running, has the highest rate of cleared cases in the city, and is the head of TO-20 - also known as "The Big Sexy Crime Unit." Naturally, that much success cannot go unchallenged, so the head of AC-12 (the anti-corruption unit) makes it his unit's mission to take down DCI Gates.

The police force portrayed here is not pollyanaish in any way, shape, or form. In the first episode we see all sorts of institutionalized corruption. We see a botched terrorist raid being covered up, hear about the purposeful endangerment of two Catholic officers and subsequent coverup after they drive over a pipe bomb, and see a superior lean on one of his investigators to allege fewer crimes ad ignore others altogether. In response to a directive to reduce knife related crime: "Two offenders but only one knife . . . There was an opportunity with one of the offenders to miss out the knife altogether." In response to an old man whose burglary she promised to investigate: "We pursue two out of three reported crimes. We down process anything that won't quickly lead to an offender."

In this world, DCI Gates' sin is that he plays the system too well. Given first right of refusal on all investigations he takes the easy cases and dumps the hard ones on other departments. On top of this he engages in "laddering", which is the attachment of all sorts of alleged crimes to an event so that he can clear them by arrest - all the while knowing that most of the alleged crimes will never be prosecuted. Thus, he makes himself and his unit look amazing. It's more playing the game than corruption. Nevertheless, he has become a primary focus for the anti-corruption unit.

And then we see someone start to purposefully attempt to corrupt DCI Gates . . .

I won't say much more, because to do so would spoil the series. Go watch it; it's the best thing I've seen in a long while.
Author: Ken Lammers on 9/04/2012
Email ThisBlogThis!Share to TwitterShare to FacebookShare to Pinterest

It's a nice review. Line of Duty's portrayal of the police is realistic.