Habemus Papam Franciscum: They Chose the Holy One 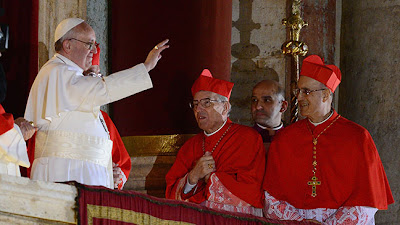 Amidst all sorts of speculation about whether the Church would choose an Italian, so the Pope would understand the workings of the Vatican administration, or a Brazilian, so the Pope would be from the country with the largest Catholic population in the world, the Cardinals went behind closed doors and chose the man most humble: a member of the Society of Jesus who is known for eschewing the finery of his office, championing social justice, and standing strongly behind the Church's moral teachings.

As I sat yesterday watching BBC online prior to the announcement they were rather confidently stating that it must be the Italian since the conclave had come to a conclusion so swiftly. They couched it in probabilities, but when Pope Francis was announced there was definitely a bit of shock and scrambling to figure out what was known about this man whom no one in the media had seriously thought might become Pope.  To top that off, they were confused by the choice of name.  To quote the slightly stunned announcer "A new name. That hasn't happened in a thousand years." Then they assumed it was a name fashioned after Francis of Assisi until someone pointed out that the new Pope was a Jesuit and therefore it might be fashioned after Francis Xavier.  Of course, these have very different implications and the announcers were not prepared to discuss the differences, or the possible synergy of the two, and they lapsed into silence on that topic.1

Personally, I was most impressed when Pope Francis asked us to pray for him. A humble man demonstrating his humility. It will be interesting to see how he will imprint this humility upon the Church.

---------
1  This is not to say that BBC's coverage was poor.  The BBC is still the best international news source, bar none. And, they didn't instantly start trying to shove the new Pope into a "conservative" or "liberal" stereotype, as I'm sure the American press coverage did.
Author: Ken Lammers on 3/14/2013
Email ThisBlogThis!Share to TwitterShare to FacebookShare to Pinterest