Green v. Commonwealth, 69 Va.App. 99 (2018) is causing a bit of a stir around where I practice, so I thought I'd try to explain the actual nuts and bolts of a judicial sentence in Virginia.

Suspended Execution: This is the amount of time that a judge hangs over a defendant's head, but does not make her serve immediately. For example: "I sentence you to five years in prison, but I suspend two of those years." Only three years are actually set to be immediately served. The other two are suspended.

Period of Suspension: This is the amount of time during which the suspended time is held in abeyance and can be imposed. Typically, you would hear this said in a manner such as "I sentence you to five years in prison, but I suspend two of those years. Your suspended time is suspended for five years."

Probation: Supervision by the probation office of a person during some portion of her length of suspension. So, a complete sentence could be "I sentence you to five years in prison, but I suspend two of those years. Your suspended time is suspended for five years and I place you on probation for three years."

[NOTE]  It is unfortunate and confusing that Virginia law and courts use "suspend" to mean two different things. It would be far better if it was "suspended execution" and "period of abeyance." Unfortunately, it's not and this leads to an almost constant state of confusion for defendants and a lot of attorneys. 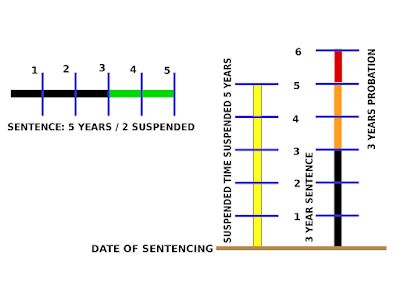 In Green, the primary ruling is that the period of suspension runs from the moment of sentencing and is not and cannot be tolled while the defendant is incarcerated (all interpreting Va Code 19.2-306). Thus, a situation like the one in the chart above occurred.

Per the example in the chart you can see the actual sentence in the top left corner. The judge sentenced the defendant to five years and suspended execution of two years. Then, on the right, the judge stated that the period of suspension was five years (yellow). This starts on the day of sentencing.

THEN, the yellow bar stops and the bar on the right is red. This is because probation cannot exist (at least not legally) after period of suspension has run out. The supervision itself is not allowed per the Green case and if a defendant does something which would trigger a probation violation there is no longer any time from the suspended execution in existence.