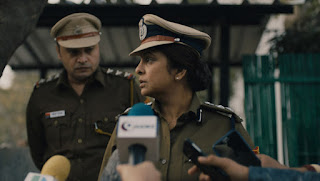 Delhi Crime may be the best thing I've seen on Netflix for years. Not kidding.

The story is a fictionalized telling of a brutal rape/murder that happened in Delhi, India. A young man and woman got on a bus to ride home and six people on the bus beat both of them and raped the woman so viciously that she died from her wounds a couple weeks later. Unlike American television, the Indian show doesn't feel obligated to shock us by showing the actual event, but builds the shock, horror, and disgust through reactions and descriptions. It's more of a slow burn and it works well as it mixes with the frustrations of the officers as the case unfolds.

The show follows the police from the moment the two victims are found naked in a ditch next to the road by officers thru their trip to the hospital and the notification of the regional commander. The regional commander arrives on scene and quickly realizes that the local department has a poor commander and isn't up to the task. She pulls in her own team of investigators, sets up shop in the local precinct headquarters, and personally takes command of the investigation.

And the police jump in with both feet. Unfortunately for them, circumstances conspire to make their lives miserable and interfere with the investigation. In fact, it appears that the very concentration of effort they are making causes their political masters to become aware and start trying to use the circumstance for political gain no matter how detrimental the political maneuvering could be to the case. One politician tries to use the circumstances to force out the head of the police force and get himself a particular cabinet position. A judge also opens her own investigation into the way police are handling the investigation (while it's ongoing). Meanwhile, the media is badly misreporting several facts that make it seem like the police are absolutely incompetent and uncaring while the police can't say anything because of the ongoing investigation. And then there are the protesters/rioters. They pop up suspiciously quickly and keep gaining in size and intensity. Because of this, when the police finally catch some of the perpetrators they have to sneak in and out the back of the police station by climbing over a fence.

Through some pretty competent police work, they catch the first few rapists. Then they have to really dig in to get the remainder. Eventually, they are sending teams out to rural villages to track down the suspects because they have scattered. One set of officers have to wade a river to go to the home of one suspect and arrest him; then they have to wade back with their suspect. Another set of officers ends up in an area where there is a Marxist rebellion ongoing and the local police force is more like a military occupation force than law enforcement. There's even a part where an informant leads them on a wild goose chase because he wants them to arrest a guy who made fun of him in front of a girl he liked.

In the end they get all the perpetrators within five days and all the political maneuvering is short stopped because the police have done an amazing and almost impossible job of catching 6 people in a country of 1.5 billion despite not having adequate resources and being hindered by the press and their political bosses. During the entire time, all the officers live in the precinct house and sleep is something that is in short supply. They just hunker down and get it done. It's impressive (and it was in real life too).

The atmosphere in the series is one that clearly shows that this was not filmed in the U.S. It was filmed in India and as such we see what we would characterize as widespread poverty and overpopulation. To them it's just normal life. It comes across incredibly realistic. It's also a good police procedural. There are no supercops here and nary a single lone wolf cop out there on a crusade to make the world a better place. Nope. This is as close as I think you can get to a realistic portrayal of how difficult policing is in a large country with a massive population and lots of impoverished people. It also shows that - even with all the inherent disabilities - when they decide to do it right they can accomplish impressive things.

In case it isn't already obvious, I highly recommend this series. I do have one bit of advice though. If you are not used to listening to English with an Indian accent you may want to put your subtitles on for the entire series. They switch back and forth between Hindi and English all the time and while the Hindi is automatically subtitled, the English is not. I've heard English with an Indian accent often enough that usually it's not a problem for me. Still, more than a couple times the switch to English came so fast that they were on the second sentence before my ears realized they were speaking English.

I give Delhi Crime a rating of 4.5 out of 5.
Author: Ken Lammers on 5/13/2019
Email ThisBlogThis!Share to TwitterShare to FacebookShare to Pinterest