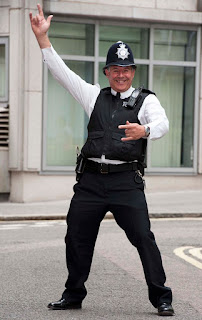 A police officer is on duty until 6 p.m. At 4:30, she clocks out and goes to collect a $300 debt. She is in civies, but has a badge and pistol on her belt. An argument ensues and the person who owes her money sprays mace in the officer's face. The officer draws her firearm and shoots - missing the person who sprayed her, but grazing the guy in the next room.

Understandably perturbed, the victim sues in federal court under §1983. In order to do so, the plaintiff claims the defendant was operating as a police officer because her shift had not ended and she had her badge and service revolver on. Everyone seems to agree that although she clocked out she was still on her shift (not sure how that works - how else do you get off the clock? Quit?).  However, that's still not enough to win the day because the 6th Circuit determines she was "frolicking":

The purely private altercation between Morris and Adams does not possess the necessary indicia of authority to find that Adams was acting under color of law.2

2  Adams’ conduct was the definition of the ancient concept of “frolic.” The general principle of the concept of “frolic” remains intact today, and vicarious liability arises only with respect to conduct that in part at least is in furtherance of the employer’s business. Restatement (Second) Agency, § 235. “If the agent is off on a frolic of its own, in a situation where the principal has neither given the agent authority to act for it nor done anything to suggest to others that the agent has such authority, and in the absence of ratification, courts do not ordinarily treat the act of the agent as the act of the principal.” Abbott Labs. v. McLaren Gen.Hosp., 919 F.2d 49, 52 (6th Cir. 1990); Carroll v. Hillendale Golf Club, Inc.,144 A. 693 (Md. Ct. App. 1929) (“Where there is not merely deviation, but a total departure from the course of the master’s business, so that the servant may be said to be on a frolic of his own, the master is no longer answerable for the servant’s conduct.”).

Hat tip to The Volokh Conspiracy.

Author: Ken Lammers on 10/21/2019
Email ThisBlogThis!Share to TwitterShare to FacebookShare to Pinterest