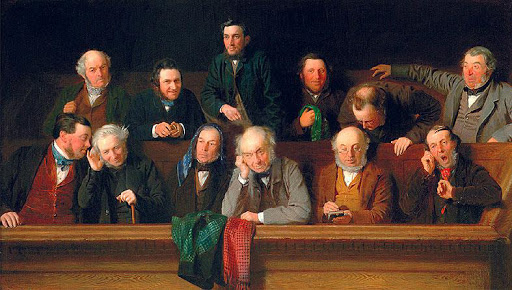 Last time, I used the new jury selection statute as an example:

That part of the statute is just rife with potential for abuse. To begin with, nobody really believes the part proclaiming its purpose. I would respect this a lot more if they'd just stuck a period after punishment and struck the rest of that sentence. I don't expect legislators to admit that they are trying to bake in potential jury nullification, but leaving it blank would have been better than adding the wink-wink, nudge-nudge "sure we mean that it's only used for sentencing purposes" language. There are other possible solutions to the problem identified which would have accomplished the same thing without risking jury nullification:

§ 19.2-00000: Sentencing Fairness
Upon motion by the Defendant after a jury has found him guilty, the judge shall inform the jurors of the sentencing range and question the members of the jury to ascertain if any individual jurors cannot set a sentence within that range. The judge shall remove individual jurors who cannot set a sentence.
Should the number of jurors remaining be seven or more the jury shall retire and determine an appropriate sentence.
Should the number of jurors remaining be less than seven the judge may proceed directly to sentencing without a jury recommendation upon the agreement of the defendant, attorney for the Commonwealth, and the trial judge. If a judge does not proceed directly to sentencing a new jury shall be empaneled specifically for the purposes of determining the sentence.
Nothing in this statute shall authorize either the defendant or the attorney for the Commonwealth to question the jury.

But, I can here someone stammering, that removes people from the jury who might argue for a lesser sentence because they don't agree with the sentencing range. The only problem with that statement is that if the statute actually adopted above works the way it proclaims it is supposed to it would eliminate the same people. The one I propose would be a trade-off. In order to receive a pristine finding in the culpability phase it has a potential to sacrifice several jurors in the sentencing phase who, if voir dire is done properly under the adopted statute, would never be there to begin with. So, it doesn't eliminate a mindset that the General Assembly proclaims it wants in the sentencing phase; it eliminates a mindset which the General Assembly has stated it wants eliminated. Of course, the statute I propose wasn't the one adopted so let's look at how the actual statute can be applied.

As I see it, the defense should probably make a motion in limine to have the judge introduce the possible punishment and ask a general question as to whether there are any jurors who cannot apply it if there is a conviction - foreclosing the parties from asking questions about the sentence. This should probably go something like this:

Judge: The offense charged today is the illegal hunting of snipes, a felony which carries a punishment of between 5 and 40 years incarceration. Does anyone believe that if Mr. Jones is found guilty they will not be able to impose that sentence?

Ladies and gentlemen, the judge has told you that snipe hunting carries a punishment between 5 and 40 years. Snipes are so rare that almost none of us have seen one and the General Assembly has determined that they are a species requiring a high level of protection because they are endangered. If the Commonwealth were to show beyond a reasonable doubt that someone knew that this creature - so rare it is almost mythical - was coming into his backyard every couple days and that person didn't contact animal control or conservation officers or even try to capture the animal himself to release it into the wild but instead sat in wait and shot the animal - if the Commonwealth proves all this, could you impose the 5 to 40 year sentence? Please raise your hand if you can. Now please raise your hand if you cannot.

When I first saw this statute, I figured the best way for it to be handled is for the judge and the judge alone to ask the question. However, as I've mulled it over, I've come to the conclusion that this would unbalance the trial process. If telling the jury and limiting questions to the judge is the procedure adopted in the courtroom it is at best neutral and at worst introduces a factor in favor of the defendant that has nothing to do with the defendant's actual culpability. Worse, unless the judge has in depth knowledge of the facts of the case he probably shouldn't have pretrial he won't be able to determine if it introduces a prejudicial collateral issue. Therefore, I've changed my mind on this.
I think best practice under this statute will probably be as follows:
1. The Judge tells the jurors what the sentencing range is.
2. The judge asks generally if the jurors would have difficulty in imposing a sentence in the range.
3. The prosecution asks questions similar to the one above (during normal voir dire).
4. The defense has an opportunity to ask questions (again during normal voir dire)
---------------
As to 3 above, this might well be characterized as "witherspooning lite." Witherpspooning has been the practice of questioning jurors in order to eliminate those who categorically will not impose the death penalty. However, in most other violent or large theft cases the prosecution probably shouldn't bother to ask questions about the range of punishment. After all, you aren't going to find many people who think that heavy punishment should not be imposed in ponzi schemes, rapes, murders, etc. It's only in cases where the prosecutor believes the defense is shooting for jury nullification based upon a possibility that the jurors will decide the potential sentence is too high that a prosecutor should engage here.
As to 4 above, I'm not sure a defense attorney should engage here at all. After all, he's not able to say out loud that the sentence range is so high that his client shouldn't be convicted. That is grounds for a mistrial if said after the jury is sworn in and if done during jury selection it's grounds to dismiss a tainted jury venire. While there is probably someone more clever than me who may figure out a way to raise a pertinent question that colors inside the lines, IMHO it's a situation where the foundation has been laid by the judge and the prosecution has probably built somewhat on it. After all, the prosecutor had to point out that only one snipe was killed in his question to the jury. A competent defense attorney can work with that in opening statements, questioning, and closing saying "one single snipe" a lot so that the insignificance of the crime sinks in without ever mentioning the range of punishment.
About the only time the defense should raise this is when the judge and prosecutor fail to. If the judge refuses to state it during her brief initial voir dire ("I believe the parties can handle this adequately.") and the prosecutor commits malpractice by not addressing it in his voir dire then, if the case is one in which the facts may seem minor compared to the range of punishment, the defense should raise the point.

Snipe hunting carries a punishment of 5 to 40 years. Does anyone have any problem with that?

The first sentence would be said nice and loud; the second - not so much. Basically, the defense wants to get the information out there, but doesn't want to strike anyone who actually has a problem with that sentencing range because they would presumably come down on the side of the defense.
------------
If we ever get back to doing jury trials (sometime in 2025 after they've built cones of silence for every juror), it's going to be interesting to see how the judges handle this and what case law develops.
Author: Ken Lammers on 8/08/2020
Email ThisBlogThis!Share to TwitterShare to FacebookShare to Pinterest