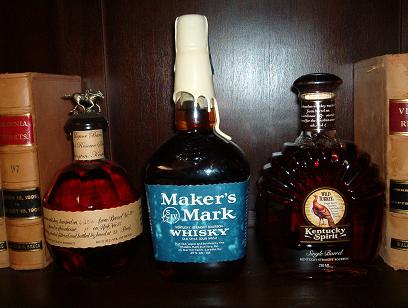 Over at Southern Appeal Feddie got something pretty cool from Blanton's and it sparked a discussion of the relative values of various bourbons.

The primary question seems to be whether Blanton's is worth it or if it is bought simply to be a little snobbish because it comes in a particular bottle and costs more. Now, first off, I must admit that I don't pay as much for bourbon as the rest of you seem to because I travel to Lexington every so often and stop off at the Liquor Barn when I am there. According to the comments over at S.A., Blanton's costs $55 or more out in the rest of the country but where I buy it it is less than $40. Other better single barrel bourbons (like the Wild Turkey Kentucky Spirit above) cost about the same. There are then lesser known single barrels and small batch bourbons. Then there are the far more generic brands such as your basic Beam & Maker's Mark (the one above is a special bottle commemorating U.K.'s 1996 basketball championship). Over at the side is the locked display of the $100+ bourbons and at least a couple $1,000+ bottles.

Which, I guess, is a way of saying that I never really buy a bourbon because it is pricey. Yes, a well designed or unique bottle can draw me in and this explains the presence of the Maker's Mark above and the Kentucky Spirit. It also explains why I'm kicking myself for not getting a bottle of Four Roses and/or Rock Hill when last in Kentucky.

Still, in the end it comes down to taste. Over the years I've tasted a few bourbons. However, I am far short of being a connoisseur so I'll only discuss those with which I have more experience: Maker's Mark, Jim Beam, Blanton's, Wild Turkey & Woodford Reserve.

Of these, Beam is the least enjoyable (though I hear good things about Booker Noe's). I must admit that it has been forever since I drank Beam straight but it is good when mixed with coke. Not what I'd buy for home but passable at a bar.

Wild Turkey is something I drank while in college. Actually, I got to be a big fan of Wild Turkey Honey Liquor because I thought the honey added a really interesting flavor you cannot find in other bourbons. My last trip to Kentucky I bought the bottle of Kentucky Spirit above. I haven't tried it yet but I'm looking forward to it.

Maker's Mark is everywhere. It's the brand all the bars carry as their "high quality" bourbon. And it's very good. I've never had bad Maker's. On the other hand it just doesn't have anything all that distinguishing to its taste. There's just not anything that really challenges the palate.

Woodford Reserve has an interesting taste which is a little hard to describe. I swear, it tastes like it is precut and lightly woody. It's a quality bourbon and I can tell why people like it so much but it's just not the one for me.

Blanton's - Okay, I admit it, I cut Blanton's. Or, if I am being manly and tough, I have it "on the rocks" and sip slowly, very slowly until enough of the ice has melted. It's just too strong out of the bottle for me. With that admission out of the way, let me say that once I have cut it a little Blanton's has the best taste of any bourbon I know (although I wonder about the $3,000 bourbon I saw a couple weeks ago at the Liquor Barn). It has a fuller taste than Woodford and just enough of a rough taste to distinguish it from Maker's. There may be better bourbon but Blanton's sets the bar very high.

So there you have it - The Ken Lammers guide to quality bourbon. Sorry no post on crime today but I just didn't have anything all that exciting to report.

Stay tuned for tomorrow when we answer the burning question: Guinness, Fosters, or Sam Adams?
Author: Ken Lammers on 10/19/2004
Email ThisBlogThis!Share to TwitterShare to FacebookShare to Pinterest

Cool post! I'm no bourbon expert either, but have you ever tried Evan Williams Single Barrel Vintage? It's slightly pricier than Maker's Mark and very nice.

I must admit that I'm not a liquor snob -- I drank out of too many plastic bottles in my youth. However, I do like a good bourbon. I've drank most of the brands you mentioned (right now I'm working on a bottle of Knob Creek), but I've never had any Blanton's. My reasoning is purely utilitarian -- it's not worth $30 a bottle for me to go from a decent bourbon to a great one.