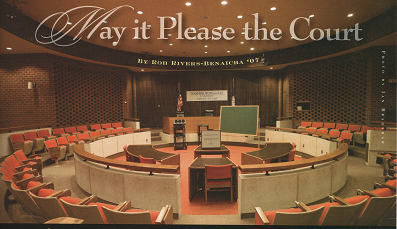 This is the current moot court in Washington & Lee School of Law. W&L had the misfortune of building their law building in the 70's and the entire place was built in the horrendous architectural fads of the time. The fact that it was built across a ravine from all the other academic buildings on campus and has trees completely encircling the entire building keep it from sticking out like a sore thumb on a campus filled with columns and traditional buildings. However, the inside was pretty poorly designed as well. Since I graduated they've put much more pleasant, smaller, technologically equipped classrooms in. It looks like the next step will be to replace the courtroom. The best thing which can be said of the old layout is that it is unusual. I really, really hate the wooden patterns on the sides and behind the bench. I don't know if it's just me, but they screw with my eyes something terrible. 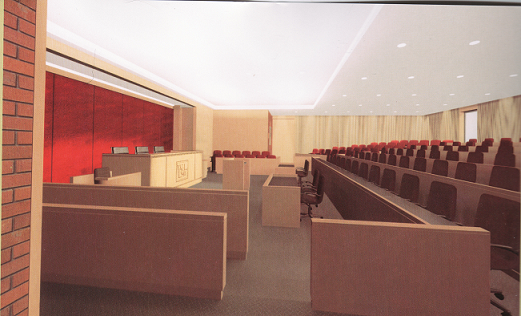 I fear that this might come to show its age as well. Light woods and unimpressive but highly workable courtrooms are trendy now. One can only hope that someday we will start building courtrooms that are actually somewhat impressive again. Maybe a moot court in a law school should use a darker wood? Maybe make it look a little traditional - maybe even a little imposing?

Of course, nobody asked me (and since I don't give gazillions to the school they probably won't). I'm just sayin' . . .
Author: Ken Lammers on 5/06/2006
Email ThisBlogThis!Share to TwitterShare to FacebookShare to Pinterest

As a fellow W&L Law alum, I wholeheartedly agree that a new moot courtroom is a great idea. Just the fact that all of the light in the room will not be sucked into the black hole that is obviously located somewhere behind the wooden slats on the walls will be a great improvement. And it is nice to see that they have abandoned the bare-concrete decor theme. But, no one asked me, either.