NASCAR has announced that it is adding a new race series in the 2012 schedule. The new races will be scheduled on Thursday nights and feature a vehicle of mandated design, much as the Nationwide and Sprint cars have been required to adhere to design requirement. Robert Tankersly, VP of Developmental Promotion announced the new race on the 28th of April:


We though about adding motocross, but the necessity of trucking in tons of dirt and removing it before the Camping World series made that impractical. We've not been able to convince any television outlets to cover the iRacing series. As well, the open wheel racers are not willing to give their series over to our control and we have some concern that if we showed people that style of racing it might detract from followership of the Nationwide and Sprint series. So, we went out and designed and created an exciting new form of racing.

At this point, revealed a prototype of the vehicle planned for use in the new Piggly Wiggly Cup Series: 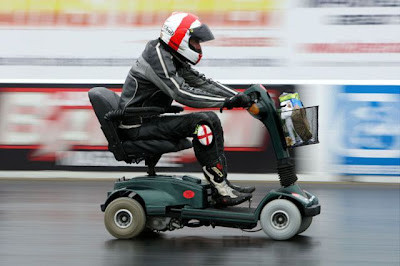 It was announced that restrictor plates on these vehicles will limit them to a maximum of 75hp.

Reaction among current racers was uniformly positive. Rookie Martin Payton, whom NASCAR introduced with the prototype as a man expected to rise through the Piggly Wiggly Cup series, compared the vehicle with the ones at his store in Asheville.


We had three of these in our store for handicap use. After hours, when we got tired of stocking, we'd race those things around the store three or four times. This will be pretty much the same except the track won't have wax on it and nobody'll get fired if a boss walks in. I can't wait to get my Quaker Oats, Jello, Hot Pockets cart out there and win our team a Piggly Wiggly Cup.

While none of the major teams have announced that they will participate so far, there are persistent rumors that Kyle Busch already has sponsors lined up an will make an attempt to win all four races in one week.
Author: Ken Lammers on 4/30/2011
Email ThisBlogThis!Share to TwitterShare to FacebookShare to Pinterest