Lying to a Bad Judge? 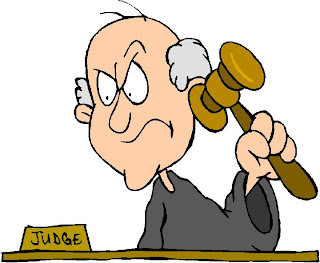 Everyone who has practiced criminal law has come across some variation of this scenario: A defense attorney practice regularly in Pitcairn County; representing at least 2 defendants in felony court every week. Judge Smith has been the judge in Pitcairn County for the last 20 years; he is probably going to be there another 20 years.

The problem is that before every trial, Judge Smith calls the defense attorney and prosecutor into chambers and says the following:


Let's cut to the chase. Is this guy guilty?

Of course the prosecutor says "Yes." What answer can the defense attorney give?

The two answers which pop into mind are "Judge, I cannot answer that question." or "He's innocent, judge." The second has the disadvantage of quickly turning the defense attorney into a liar in the judge's eyes as he proclaims the innocence of each and every client and overwhelming evidence in several cases make it obvious that he could not have thought they were actually innocent. Yes they're all "innocent until proven guilty", but Judge Smith ain't gonna buy that. So, the default would be the first answer. Giving that answer, the defense attorney neither misleads the judge nor violates ethic rules.

Unless either of them was a witness, how can the prosecutor or the defense counsel know the answer to the Judge's question? Any officer of the court who answers the question other than by saying "I don't know, I wasn't there." is committing perjury.