The Navy keeps enemies from our shores. The Marines provide flash and verve. The Air Force lives in nice dorms and eats really good chow. 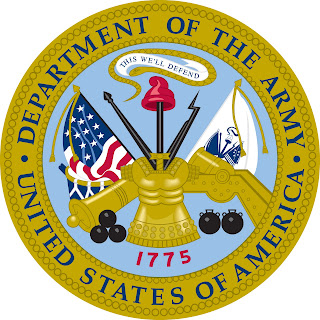 The Army? It just wins wars.

There's been a standing joke around my office the last week. Through all its variations it has basically been, "Ken, thank you for your service. I'm going to honor your service by not working Friday." It's all in good humor, but it has set me to thinking about what would honor me and all the other veterans.  My conclusion?

If you are young enough and fit enough, serve your country and your fellow citizens.

But, I don't believe in violence!   Fine. Become a corpsman or medic or a chaplain's aid.

But I don't want to go to Afghanistan or Iraq or Libya!    Okay.  Join the Coast Guard.

But it will sidetrack me from my path toward maximum earning potential, could put me at risk, my parents will fear for me, and my peers will think there is something wrong with me.      Ah, now we come to the crux of the matter.  Well, okay, sure, you can just leave the heavy lifting to those whom you deem far enough below your social status. After all their lives and families obviously aren't as important as yours. Don't sweat it. A sense of duty to others really won't be something you'll need in your life anyway.

Look, I realize that most won't serve and I've met any number of Veterans who are troubled and troubling. Still, when I look at someone and that person has served his or her value as a person rises in my eyes. I cannot help but see someone who belonged to something greater than himself and who stood between me and mine and harsher realities in the world. I thank all of you who have served; all of you who are serving; and all of you who will stand in the future as part of the unending line that stands between the cruel realities of a world where life is nasty, brutish, and short and the gibbering masses, who speak of rights they have earned only by capricious birth. Some will speak hollow praises, but if you well and truly do your job the great majority will never understand what you are sparing them from. You serve - you choose to serve - so that the rest of America can remain in blissful ignorance of what would happen if you were not there.

This We'll Defend.
Author: Ken Lammers on 11/10/2011
Email ThisBlogThis!Share to TwitterShare to FacebookShare to Pinterest

I've never really enjoyed thanks from people for what I do.

Look I've done it, others have or haven't. Want to show me gratefulness for what I've done. Ensure you never send a Soldier to die unless it is damn well worth it.

"Want to show me gratefulness for what I've done. Ensure you never send a Soldier to die unless it is damn well worth it."