It's been a while since I checked in with our academic friends over at SSRN, so I thought I'd go see what's going on. In order to narrow parameters, I searched for "prosecution." It was pretty much what you'd predict. As I went through the latest hundred articles, the vast majority of were generally dismissable out of hand as they dealt with topics that were useless for Americans such as anything having to do with the International Criminal Court or things like comparative criminal rehabilitation movements in Mauritania and Mali.

I was left with twelve articles and nine of those were anti-prosecution. Some were in the form of academics rubbing there hands together as they cackled over their paper proclaiming "This is the way we can make prosecutors do what we want forever! Bwahahahaha!" Others were simply "You can beat the prosecutors this way" or the ever popular "If we all get together and sing Kumbaya all the troubles will go away." Of the other three, one was a basically neutral argument about how forensic evidence could be presented better. The two left were prosecution friendly, but not exactly glowing endorsements; instead they were nuts and bolts explanations of evidentiary procedures that could benefit prosecutors. Like I said before, there was nothing that you wouldn't expect from the wasteland of academic papers.

However, I did learn something entirely new. Did you know that, according to several of the articles, we live in a car cereal state? I didn't. I guess I should have seen it. I mean, there have been indications: 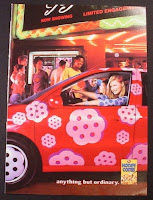 Oh, wait that wasn't "car cereal state" it was "carceral state?" What the heck does that mean?

I know what it means! It means that academics are playing the game of Importance by Obfuscation. They're taking an idea which could be explained in an easily understood way and using an obscure, seldom used word to make themselves sound more important. After all, if the term "carceral state" isn't in common usage and people are either unsure as to its meaning or don't understand it at all then the fact that you understand this deep, meaningful phrase gives you a sort of gnosis that you can use to show that your knowledge - and thus your solution - is superior on this topic.

At least, that is, until everybody figures out that "carceral state" boils down to "country with a high level of incarceration." The next step in the game is for you to point out that your definition of "carceral state" is muuuuch more nuanced than that, but then you will have to explain that you mean "a society in which a high level of incarceration is both culturally and economically intertwined to the point that it has become entrenched." You will excuse your use of the term "carceral state" by calling it a term of art, a necessary shorthand among experts in this subject.

Of course, the real reason for the use is still to play Importance by Obfuscation. After all, if you wanted the term to be easily understood you could have called it "incarceration state" or even more simply "imprisonment state." You didn't.
Author: Ken Lammers on 4/01/2019
Email ThisBlogThis!Share to TwitterShare to FacebookShare to Pinterest

I'm sorry, but until lawyers drop legal Latin, you have zero room to complain about jargon.

I complain about it when we do it too. See the post below: The Harrowing Effects of BigWorditis.

Ours comes from a little different place though. We have a bunch of detritus from different periods in the evolution of the law that hang on because of the laws' heavy dependence on precedence.

We don't create unnecessarily obscure words; we come preloaded with them.