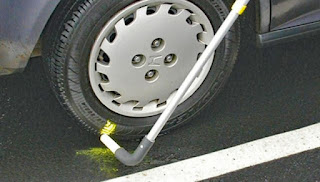 Chalking cars is a police practice that I can personally attest to as being at least 30+ years old. I remember getting warned about it in my youth when I visited Richmond, Kentucky. And, I must admit to coming out every so often, in different towns in different States, to find one of my my car’s tire marked. I never got tagged with a ticket from the marked tires which I guess means I was always one of the lucky ones who got back to my car in time.

For those of you who don’t know what I’m talking about, chalking is a long hallowed practice of many a police departments’ traffic enforcement division. Broad Street has a two hour limit on parking. Traffic officers travel down the street every so often and mark the tires of cars parked on the street with chalk. Then they come back two hours later and if your car is still parked there with chalk on its tire you get a ticket.

It’s actually the better of the two traditional options for controlling parking. The other is control thru annoyance by using parking meters. Nobody likes meters. If there’s a meter, the person parking downtown has to bring quarters with her and run out to her car every hour or so to put another one in. Conversely, the in-town businessmen who want to limit parking duration so that the spaces will open every so often for their next customer don’t want someone not stopping at their store because they don’t have a quarter for the meter. Of course, the fact that the meter puts a big red “EXPIRED” after the time has run out makes life easier for traffic enforcement and the same amount of enforcement probably ends up with more tickets.

But, it looks like meters may be the default solution from here on out – at least in the Sixth Federal Circuit. In Taylor v. Saginaw, a scofflaw got tired of paying her tickets. She sued Saginaw for violating her civil rights by marking her car’s tires with chalk and then using that mark to charge her with parking violations. For some reason, this burning issue made it to the federal court of appeals and they agreed with her.

Personally, I think the 6th Circuit got the constitutional analysis right. Chalking the tire of a car is a trespass upon the chattels of the car owner and it’s done to reveal information that otherwise would be unknown. Therefore, police ought not to be doing it without a search warrant (or at the very least probable cause). Saginaw’s arguments in favor of allowing officers to do it were that chalking was allowed under the automobile exception and/or community caretaker exception. They lost the automobile argument because it’s based on the fact that cars are mobile and the entire point of chalking a car is to prove it wasn’t mobile. As well, there really isn’t any immediate harm to the community which chalking is designed to protect against. Strangely, the one argument I think might have had some teeth, relying on the administrative search exception, was abandoned by Saginaw in the court of appeals; I can only imagine that case law must not have been favorable.

Tennessee, Kentucky, Ohio, and Michigan can no longer use chalking. Huzzah! Hooray!

Or maybe not. All a locality has to do is avoid touching the car and it can continue its ongoing battle with those who hog parking spaces.

The old fashioned solution to this is to put meters up everywhere. As pointed out above, meters suck and don’t make anyone happy except the bean counters downtown who now have a new revenue stream. As best I can find on the internet (which must mean it’s true) a reasonable cost for a single space meter is less than $500 assuming the locality buys the sane version instead of the crazed upsell monstrosities. The investment is probably made up within two years and then, assuming your city is the typical poorly designed failure without adequate parking, becomes a wonderful profit stream. It punishes your citizens and almost surely hurts your businesses (after all, there’s free parking at the shopping center outside town), but it provides a profit stream for the government.

However, assuming you have people in your city government who care about their citizens and only want to make parking work, there are other solutions in the modern world. In particular, license plate scanners should make this process even easier for officers. Instead of getting out of their vehicles to chalk a car or using a long stick with a piece of chalk on its end to do the same thing while remaining seated, the traffic control officer simply drives down the street every thirty minutes with the scanner getting the plate of every car. Software in the police car pings every time a car has been there for over the allowed time. Heck, if the system is even halfway sophisticated it can do what the toll systems do nowadays and simply report all the miscreants to some central computer so that tickets can be mailed to them later. The officer doesn’t even have to stop. Personally, I think they should; a ticket on the window has a more immediate deterrent effect than a ticket in the mail a month later. Even then, the computer could print the ticket out automatically so the officer only has to spend a few seconds stepping out and putting it on the car. It’s a better system; it just costs a lot more money than chalk.

If the locality doesn’t want to spend the money to put a license plate scanning system in its parking enforcement vehicles, it could simply buy each officer a cheap cell phone and have them take pics of the street with the time and date turned on so they’re burned into the picture and then come back later to check to see if the same cars are there after the time limit has run. Simple. Effective. Cheap.

So, this weird little opinion shouldn’t change things all that much. You’ll still get parking tickets. You just won’t be subject to the grave injustice of having a chalk mark on your tire.
Author: Ken Lammers on 4/30/2019
Email ThisBlogThis!Share to TwitterShare to FacebookShare to Pinterest