Oops, They Did It Again : Virginia Department of Health Boosts the Numbers More 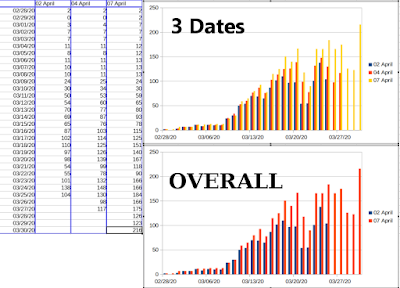 Before I get "Ken, you're being a conspiracy theorist", I really can't think of a plausible conspiracy to theorize about here. After all, what are they conspiring toward? The medical threat is already riding roughshod over both our constitutional rights and economic interests. They've already run the board.

I know they throw out the typical, boilerplate, don't hold us to what we say excuses under the chart and I'd understand if there was a correction on a single day. I'd even understand if there was a one time correction for a number of days accompanied by an explanation that someone had been hiding reports or misdiagnosing it as flu. Neither of those seem to apply. At least, I can't find an explanation anywhere.

Anybody know what's going on?
Author: Ken Lammers on 4/08/2020
Email ThisBlogThis!Share to TwitterShare to FacebookShare to Pinterest

I have no knowledge whatsoever, but it doesn't seem that strange to me. There are multiple sources of error:

- Tests have a margin of error, in both directions
- No idea what VA's policy is, but in most other places, a death is not attributed to COVID-19 without a positive, pre-death diagnosis. Tests are scarce, so most places I know of are not testing corpses in general, but there have been some post-mortem tests of specific individuals who might have been notable spreaders, in order to better model things
- Reports for the same day could be coming in at different times, delaying reports
- People are made of humans. They make mistakes.

As an aside, you know this argument is going to become politicized, at least on a national scale. Hopefully nobody shoots up a pizza joint over it, but I'm personally considering petitioning to join another species out of embarrassment.

At this point they seem to be making additions across the board every day with no explanations. Today they made additions as far as 42 days back. They need to explain that sort of thing.

This is going to get really, really nasty on the political side and it won't just be nationally.