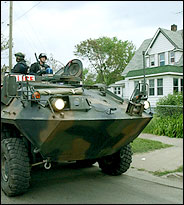 The first question which pops into my mind is why law enforcement has a military APC?

It's sad when relations between a police department and the citizens it is supposed to protect deteriorates to this point. I know it would feel an awful lot like an occupying force rather than "Protect and Serve" if I saw this rolling down my street. Yes, I know there was a riot going on and the police had to do something but sending in the tanks?

Hopefully, peace will return and the issues will be addressed so that this doesn't happen again. (Yes, I know it's improbable but we can all hope)

.
Author: Ken Lammers on 6/19/2003
Email ThisBlogThis!Share to TwitterShare to FacebookShare to Pinterest