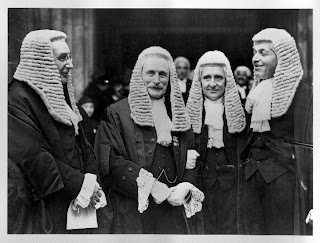 A year or so back, the Virginia General Assembly stopped appointing new judges. Budgets were tight and this was the hit that the third branch of government was going to take - no new judges for two years. It wasn't a perfect resolution and, as judges were forced to retire at 70 or left for other reasons, all of us out here in the trenches started to fuss. Some, maybe even most, of this is white noise - the typical reaction of anyone when they are told they can and shall do more with less. On the other hand, there are clearly circuits which have been heavily burdened by this situation. The most celebrated is probably the 11th Circuit where one juvenile and domestic relations court judge remains for the city of Petersburg and 4 counties. Another difficulty is the 30th Circuit which had an average caseload of 2,355 cases per judge commenced in 2009 (making its judges already the 3d busiest in Virginia) and lost one of its 3 judges in 2010. Assuming a fairly constant indictment rate, this means that the two judges remaining have an average caseload of 3,533 cases per judge commencing yearly.1 Comparatively, across Virginia the average number of cases commenced per judge in 2009 was 1,837.

These difficulties have led to the governor proposing the adding of money garnered from Virginia lawyers' dues to the general tax fund. Some also credit it as the cause of the attempt to redraw the lines for judicial circuits in Virginia. I don't know if the latter is true and rather hope that it is not because there are several circuits which could be improved if a common sense plan was put in place.

Personally, I think there is another option which the General Assembly might look into if it were seriously trying to cut funds in the trial courts: shifting non-violent felonies to the general district court. This could be done two ways. The first would be to pass a statute reducing certain felonies to aggravated misdemeanors. An example might be something like this:

(a) Prior to the commencement of a preliminary hearing in general district court or juvenile and domestic court, the prosecutor shall determine the sentencing range to be applied if the defendant is found guilty. This shall be announced to the court prior to the commencement of the hearing. If the mid-point of the potential sentence is less than 2 years the judge shall amend the case to an aggravated misdemeanor.

(c) A defendant convicted of an aggravated misdemeanor has the same right of de novo appeal to the circuit court as a defendant convicted of a class 1 misdemeanor. In the circuit court sentencing guidelines (i) shall not be seen by the jury at any time, or (ii) the judge prior to rendering judgment and their use by the judge shall be entirely discretionary.

(d) Aggravated misdemeanors shall be scored as though a felony conviction on future sentencing guidelines reports.

(e) It shall be the duty of the Commonwealth Attorney in a jurisdiction to prosecute all felonies and aggravated misdemeanors.

The second possibility would be to simply try non-violent felonies in the lower courts, without converting them into any form of misdemeanor, and allowing them the same right of "de novo" appeal as misdemeanors enjoy. This is more constitutionally chancy. Colten v. Kentucky seems to give misdemeanors tried this way the federal supreme court's imprimatur. I've never heard of felonies dealt with in this manner. However, the de novo trial availability allows the defendant access to a court of record and jury. I can't think of a reason (other than "OMG, you can't do that with a felony") why it would be logically different.

The reason the General Assembly might want to do this so that it can have fewer circuit court judges. The general district court and juvenile and domestic court judges earned $16,000 less per year in 2008 (latest available figures).

If circuit courts are only handling violent felonies, a few non-violent felonies, civil cases, and appeals from the lower courts their caseloads should drop significantly. I'd hope for at least a 50% drop.2 On the other hand, when the cases in the lower courts increase in number it should still be less work than there was in circuit court. There'd be no preliminary hearing. There'd be no wasted time with all the niceties of circuit court. Perhaps there would be a need for a third more gdc judges. I don't really see that jdr courts would need more judges. The number of circuit court judges would drop to about 80 (decrease of about 75), saving the Commonwealth about $11,850,000. The number of general district court judges would increase to about 170 (increase of about 45), costing the Commonwealth about an extra $6,390,000. The total savings would be about $5,460,000.

I don't know what Virginia's annual budget is, but a $5 million saving is nothing to sneeze at in my book. In fact, I see this as a win all around. The General Assembly saves money. The lower court judges gain prestige from handling more significant cases. The circuit court gains prestige from being the place where only the truly serious cases are handled. LEO's and prosecutors are happy because they can take care of the minor thefts, frauds, vandalisms, etc. which are felonies more quickly than they can currently be dealt with. Some defendants also benefit by having most of their cases handled more quickly (mostly those who would get probation or weekend jail or home incarceration or work release - nobody who is going to spend 6 months in jail is going to want to hurry his case). Even defense attorneys should benefit from this. If they have one of those defendants who hasn't got a shot, the defense attorney can put on the big show in general district court where the punishment is limited in order to satisfy Unreasonable Defendant without exposing him to the greater dangers of either jury sentencing or a judge not bound by the guidelines.

Don't you need to define the punishment range for aggravated misdemeanors? Is it more than 12 months in jail?

Wouldn't you also need to tinker with all kinds of statutes in 18.2 that say (e.g.) "If any person forge a public record...he shall be guilty of a Class 4 felony"? Or else clarify in your 19.2 section that the alternate status of aggravated misdemeanor exists, etc.

Either he edited the text or I read something that you didn't but Ken set the punishment range at up to 2 years in jail. The one major problem I would see with this is the increase in jail populations. Convicts that would normally do to the pen would instead stay in the jail.

Another thing to change would be to increase the threshold for petite larceny to $1,000 from the $200. Make unauthorized use and property damage misdemeanors up to $2,500.

Anon1 - 2 years max. As for changing all the statutes in 18.2, I don't see the need. I see this as modifying punishment much like § 19.2-297.1. If there is no need to modify the 18.2 statutes for the three strikes law to apply there is no need for it in a case which does not increase punishment.

Anon2- An increase in the threshold does not seem to be in the works.

I'm not wedded to making the offender spend the time in jail, but I suspect that even as it is the statute wouldn't shift the burden all that much. I've seen a lot of people spend long stretches of time in jail. Back when I was a defense attorney I would have sworn that the DOC never came to get anyone who didn't have a sentence over 2 years.

The biggest potential problem I see with the proposal is dealing with multiple charges. If someone is charged with several felony offenses, but her guideline mid-point only calls for a year and 8 months incarceration, there are going to be those who balk at letting all of them be changed to aggravated misdemeanors, even if the punishment is the same.

The felony larceny threshold of $200 is among the more grotesque features of our Code. How much more expensive do things have to get before that changes?

What do you call a member of the Virginia General Assembly who supports reducing penalties for criminal offenses?

A former member. Will never happen.