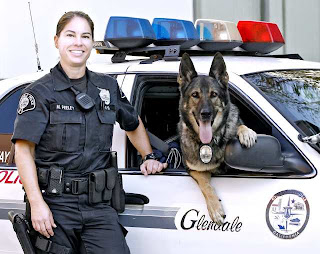 You'll all recall that back when the United States Supreme Court declared dog sniffs not to be searches I took umbrage. In fact, I even wrote an article for the NYU Journal of Law & Liberty. Interestingly, the greatest proponent of the infallible dog sniff, Justie O'Connor, and the author of the opinion, Justice Stevens, have both retired from the bench and now the US Supreme Court has accepted two dog sniff cases to be heard next term. I am curious to see whether the Court will take this opportunity to prune off the dog sniff branch of 4th Amendment Jurisprudence because it is so out of kilter with Kyllo, or if it is going to use it as an opportunity to defend and expand dog sniff availability. It could also split the baby and find that Kyllo is a protection of the home, not vehicles, and therefore no dog sniff or electronic device can be used outside a home, but that both could be used in other circumstances (cars, luggage, etc.).

In any event here are my summations of the two Florida cases on appeal:

In Jardines, the Florida Supreme Court finds that a dog sniff at a house is a search (in contrast to a dog sniff of a car or luggage). The Court points to two factors: (1) The special emphasis the Home is given under the 4th Amendment as the place where a citizen's 4th Amendment right is strongest, and (2) the amount of intrusiveness involved in a dog sniff of a home.

The second factor is the actual point of the opinion. The Court points out that in all the luggage and vehicle cases there was minimal intrusive activity and potential for public embarrassment. Then it describes the activities the government undertook at this house:


Based on the foregoing, we conclude that the dog "sniff test" that was conducted here was an intrusive procedure. The "sniff test" was a sophisticated undertaking that was the end result of a sustained and coordinated effort by various law enforcement departments. On the scene, the procedure involved multiple police vehicles, multiple law enforcement personnel, including narcotics detectives and other officers, and an experienced dog handler and trained drug detection dog engaged in a vigorous search effort on the front porch of the residence. Tactical law enforcement personnel from various government agencies, both state and federal, were on the scene for surveillance and backup purposes. The entire on-the-scene government activity—i.e., the preparation for the "sniff test," the test itself, and the aftermath, which culminated in the full-blown search of Jardines' home—lasted for hours. The "sniff test" apparently took place in plain view of the general public. There was no anonymity for the resident.

The Court goes on to further reason that because, unlike a vehicle sniff, there is no initial reasonable articulable suspicion required a home sniff "raises the specter of arbitrary and discriminatory application."

I think this has a good chance of surviving the US Supreme Court. It is well reasoned and sets out exactly why there is a difference between a home sniff and a vehicle or luggage dog sniff. However, the US Supreme Court could distinguish it on factual grounds. It could say, "Yes, this amount of activity was too much, but less obvious activity could make it valid."

In this case a dog alerted on a door of a vehicle and when the vehicle was searched the vehicle contained items which are used to make meth, but none of which the dog was trained to alert to. The officer did not keep records of any times when his dog had alerted and drugs had not been found. In this case, the officer insisted that the dog did not falsely alert, but that someone must have touched the door handle after handling meth and left an odor.

The Supreme Court of Florida rejects this as violating the 4th Amendment and sets out what the government must provide to establish probable cause in the courtroom after a dog sniff has been used on a vehicle:


we adopt a totality of the circumstances approach and hold that the State, which bears the burden of establishing probable cause, must present all records and evidence that are necessary to allow the trial court to evaluate the reliability of the dog. The State's presentation of evidence that the dog is properly trained and certified is the beginning of the analysis. Because there is no uniform standard for training and certification of drug-detection dogs [neither in Florida or the United States], the State must explain the training and certification so that the trial court can evaluate how well the dog is trained and whether the dog falsely alerts in training (and, if so, the percentage of false alerts). Further, the State should keep and present records of the dog's performance in the field, including the dog's successes (alerts where contraband that the dog was trained to detect was found) and failures (“unverified” alerts where no contraband that the dog was trained to detect was found). The State then has the opportunity to present evidence explaining the significance of any unverified alerts, as well as the dog's ability to detect or distinguish residual odors. Finally, the State must present evidence of the experience and training of the officer handling the dog. Under a totality of the circumstances analysis, the court can then consider all of the presented evidence and evaluate the dog's reliability.

The Florida Court also goes on to state that the State cannot just say "The dog is trained and certified" and then require the defense to provide proof it cannot possibly have to disprove the dog's infallibility.

Remember, as long as the US Supreme Court sticks by its position that a dog sniff can't possibly reveal anything which isn't illegal, we're talking about probable cause here. While there is no exact definition of probable cause it is clearly less than 50% probable (otherwise the courts would be saying preponderance). I agree that the dog's record both in training and on the street should be introduced. However, if the dog is correct 5 out of 10 times, I think that probable cause is established. Then the question becomes, how far below 50% accuracy can a dog's record go before we decide it is too low? 40%? 35%? 20%?

Unless the US Supreme Court decides to scrap Cabelles completely, I think the fact that the dog was trained and yearly certified will probably get a stamp of approval for probable cause purposes and the Florida Supreme Court will be overturned on this case.

Of course, like everyone else, my ability to prognosticate the results from the US Supreme Court goes on the fritz some times. So, I guess you will all have to wait until next year to find out the exciting conclusion to the next step in the never ending dog sniff ain't a search saga.
Author: Ken Lammers on 4/02/2012
Email ThisBlogThis!Share to TwitterShare to FacebookShare to Pinterest

I practiced criminal defense down in Brevard County until recently, and used the Harris decision with some success. Both cases were misdemeanors, and the first prosecutor was not even aware of the case law. The Florida Association of Criminal Defense Lawyers (FACDL) recently put out a article on Harris in the "Florida Defender." I've also used their sample motions to suppress pertaining to K-9 sniff searches.