Is there a Right to a Transcript from a Court Not of Record? 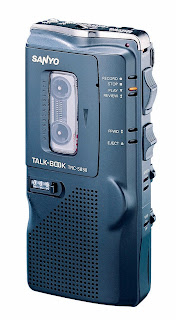 In Virginia, we have a two tier trial court system. The lower trial courts are General District Court (GDC) and Juvenile and Domestic Relations Court (JDR). The upper trial court is Circuit Court. Both the GDC and JDR are constitutionally defective. Their primary flaws are that the lower courts don't have a court reporter and do not have an option for a jury trial. Consequently, everyone convicted in the lower courts has an absolute right to appeal to the Circuit Court and get a brand new trial (trial de novo).

Here we get to something of a tricky point. There is no court reporter in GDC or JDR so there is no record of the preliminary hearing. There are two possible solutions to this. The first is provided under § 16.1-69.35:2 - "Proceedings in a general district court may be tape recorded by a party or his counsel." The second is under § 19.2-185 - "The judge of the court of record to which the case may be or has been certified may order the testimony of the witnesses at the preliminary hearing to be reduced to writing." Of course, under this statute the defense counsel must go to the judge in the Circuit Court and get an order requiring a court reporter to be in GDC or JDR before the preliminary hearing or there won't be recorded testimony to be transcribed. Circuit Courts in some jurisdictions have, in the past, pretty much refused to order court reporters for anything less than murder or rape; this is why I always had a tape recorder with me while I was a defense attorney. In other jurisdictions Circuit Courts have treated the request for a court reporter in a preliminary hearing as a pro forma matter and signed off on everything put in front of them.

A couple years ago the Virginia Court of Appeals put another layer upon this in Asfaw v. Commonwealth, APR10, VaApp No. 2496-08-4. Here's my summation of the case.


(1) There are two factors to be considered in deciding whether an indigent defendant is entitled to a state financed transcript of a preliminary hearing: (a) the strategic value the transcript provides to the defense, and (b) the availability of alternative devices that would fulfill the same functions as a transcript. (2) The strategic value of a transcript from a prior hearing can be presumed because of its potential use in impeachment. (3) All an indigent defendant has to assert is a reasonable basis for believing the transcript would (a) serve as a valuable discovery device in preparation for trial or (b) as a tool at trial itself for the impeachment of prosecution witnesses. (4) An indigent defendant's right to a transcript is waived if it is asserted so late that it would disrupt a scheduled trial. (5) When a transcript is requested so that the defense does not have to have a continuance to get it or cost the State extra money for expedited transcription the defendant has not waived his right to a transcript.

In Asfaw there had been a court reporter at the preliminary hearing so the argument was entirely about whether the judge should have given the defendant a copy of the transcript. However, the court founded its decision in equal protection principles, so it could apply to situations wider than itself. On the other hand, it could also be a very limited decision. After all, there is clearly a statutory right for the defense to record any hearing and that is an "alternative device which would fulfill the same functions as a transcript." After all, wouldn't it be better to play a recording of the defendant's own voice to impeach him rather than introducing page 27 of the transcript into evidence?

I've been asked whether I think Asfaw means that an indigent defendant is entitled to a transcript of testimony during a misdemeanor trial in lower court when the case has been appealed for a de novo trial in circuit court. It's a sensible question since Asfaw seems open to wider application. However, I must say that I don't see the courts applying the case in this manner. To begin with, the circuit court judge has not been given the power by the General Assembly to give the indigent defendant a transcript of a misdemeanor trial in lower court. As we all know from watching the ability of courts to deal with cases equitably thru taking cases under advisement being shorn away, unless the General Assembly has written a statute specifically allowing the judge to do something, he cannot. The argument against this would be that the requirement of a transcript is constitutional and therefore trumps Virginia law. I think this fails because of the statute allowing defendants and their attorneys to record the trials in lower courts by themselves.

I think Asfaw might be an orphan case. The Court of Appeals saw a case wherein the transcript was easily available and denied for no particular reason. It slapped down the judge for arbitrarily denying the transcript to the indigent defendant. Notably, it has not been mentioned in any case since it was issued. While it has only been a couple years, when a case is issued and no other case mentions it that often indicates that the case will be limited to its fact pattern.
Author: Ken Lammers on 4/22/2012
Email ThisBlogThis!Share to TwitterShare to FacebookShare to Pinterest