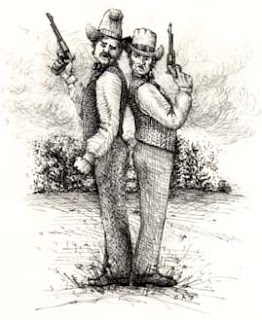 I tripped across this hypothesis on the internet (it was framed for the MPC) and thought I'd address it under Virginia law:
----------

A walks into the room knowing B has a gun on him, in fact, A also has a gun, but he wants to shoot B and get away with it in self-defense.

A provokes B by taunting him with vulgar words with the intent that B shoot him, miss, and then A would be able to shoot back in self-defense.

B shoots and misses. He has more bullets and A knows.

A shoots back and misses. He has more bullets and B knows.

B shoots back killing A. B claims self-defense.

The Dillema: B’s initial shooting wasn’t justified, because he had no indication that A was using deadly force.

But for A’s purposes if he would have been the killer, he was the provoker, so no self-defense.

Assuming, as the problem seems to, that A did not have his firearm in plain view or somewhere so that it was obvious, B has no right to shoot at A.

A has contributed to causing the problem. Under Virginia law, this means that he has a duty to retreat. Only if he retreats to the point that he cannot retreat any further is his defense of self "excusable." If A had killed B without retreating, he would be on the hook for a homicide conviction; the only question would be the degree. Assuming there is no evidence of A's intent, this would probably result in a voluntary manslaughter conviction. Of course, if there is evidence that A went to the residence with the intent to kill B while pretending to act in self defense then there is neither "excusable" (partially caused by victim; duty to retreat) or "justified" (victim entirely not at fault; no duty to retreat) self defense. This would most likely be Murder in the Second Degree. However, I am, again as the problem seems to, assuming this evidence does not exist.

B is definitely guilty of a homicide. He shot first with only verbal provocation. The fact that he was a bad shot and missed the first time does not absolve him. It would be a jury question as to whether he was guilty of Second Degree Murder (with malice aforethought) or Voluntary Manslaughter (heat of passion). I lean toward Second Degree Murder because the B already had the firearm out and aimed at A; it's hard to argue that he did that in heat of passion (voluntary manslaughter) instead of with malice aforethought (murder in the second degree).

That's how I see this panning out under Virginia law. Of course, we never adopted the MPC and have stuck by the common law (sort of). Does anyone see different results in other jurisdictions?
Author: Ken Lammers on 4/29/2012
Email ThisBlogThis!Share to TwitterShare to FacebookShare to Pinterest