Centre: The College, The Study, The Legend 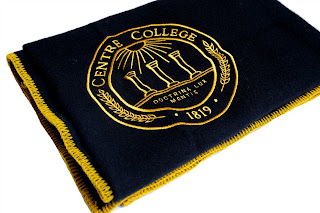 I chose Centre because it used "real" grades (no grade inflation), no one had graduated with a 4.0 in decades, about 25% of the incoming class did not graduate (at that time), and the studies were rigorous. In other words, when I worked my rear off and graduated with majors in Religion and International Studies and had a gpa slightly north of 3.0, I knew I had earned those grades and that diploma. I didn't get a pass through because I scored high on my SAT or ACT, played sports, or had the right parents or connections. Too many "elite" schools are like that now. This was driven home to me when I went off to law school at another "elite" school, where students had high SAT's and came from the right people, and was talking to some undergrads and they bragged about the quarterback having a 4.33 gpa.

The implication in the article that the studying is because Centre is isolated is kind of weird. Centre's 30 minutes out of Lexington where there are plenty of restaurants, bars, places to shop, etc. As well, there are parties on campus every weekend. There was no lack of distractions if you really wanted them. That's not the reason people study at Centre - at least not while I was there. We studied because it was a hardwired tradition at Centre; getting a superior education was why you were there. It's so much a part of the culture that the fraternities seriously competed for the "Yerkes Cup", which has been awarded forever to the fraternity with the highest gpa. Furthermore, the classes were hard, the grades were real, and you could fail.

Look going to a lesser school doesn't necessarily mean you are inferior and I have been consistently impressed by graduates of two schools whom I have met: Morehouse & Harvard. I've just never met a graduate of Morehouse who didn't come across well and who did not seem to have received some of that from Morehouse. Mind you, the number I've met is less than 20; still, I would have expected to run into a couple bad apples by then from any school and I have not. As for Harvard, I've probably run into between 30-50 of them in my life (most of them in group settings without long personal conversations). All were extremely intelligent and talented, if tending toward condescending (not all though; went to law school with a good guy from there). The problem is, I never know if they really gained anything from the school other than connections and the school name. I think most would have been just as well educated in many other schools and been just as smart whether they went to Harvard or not. The primary thing I've learned about dealing with Harvard alums is how to deal with the false modesty displayed when they won't say what school they went to. When asked, they will say "I went to school in Boston." The implication is clear; after all, there is only one school of note in Boston. The appropriate answer is to look the person right in the eye and say, "So, how did you like Boston College?"

And, with that last little bit of meandering, I'm off to court.
Author: Ken Lammers on 5/23/2012
Email ThisBlogThis!Share to TwitterShare to FacebookShare to Pinterest