Harriet Miers is associated with no theory of constitutional interpretation. She appears to have never shown any interest in constitutional analysis at all.

Who is this Harriet Miers, this practicing lawyer, who presumes to go on the Court and write the opinions we [professors] must spend our lives reading and analyzing?
. . . [S]he is just an attorney. The very idea!

Thinking about it that way has begun to thaw my opposition to Miers. . . . Perhaps the Court is harmed by an excess of interest in the theoretical. A solid, experienced lawyer like Miers, with no real background in constitutional law, might look at the text, the precedents, the briefs, and use the standard lawyer's methods to resolve the problem at hand. What is wrong with having that style of analysis in the mix? We need a safeguard against the excessively theoretical.

Cool! If we take that a step further we should try to get someone on the court who spends all his time in court actually trying cases. 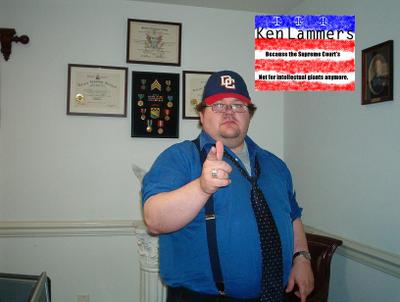 And here's my campaign poster: 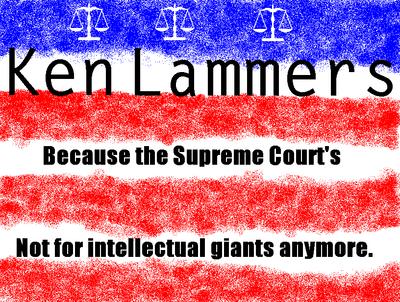 Contact your Senator today. Remember it's advise and consent. All we have to do is convince 51 Senators that the only consent they will give is if the President takes their advice and nominates me.

[addendum] For those of ya'll coming here via Orin's direction: I, perhaps to the detriment of my candidacy, have a paper trail on the issue of Reasonable Articulable Suspicion of a Criminal Activity.

Did you make that sign yourself? If so, sorry bud, but I cannot support you.

Our President's hope is that we can bring a "fresh perspective" to the Court, and that means “a less intelligent perspective." While this theory may seem counterintuitive at first, it is the same theory that he has applied to the Executive branch for the last five years, so at least he's consistent.

No, sorry Sign-Maker, but we ideally need a justice with no discernable skills or intellect of any kind, for maximum perspectival freshness. Since lawyers agree that that Bush's first choice, Justice Weeb L. Wobble, didn't pass constitutional muster on account of its not being a human being or a U.S. citizen as the founders' originally intended, Harriet "Gosh you are the coolest governor evar!11!oneone!!!" Miers was the best nominee he could find.

As you would expect, the President thought long and hard on that decision, and even he originally doubted its wisdom. Then he looked at her heart. She used it to dot the "i" in her first name in a memo she'd recently sent him on John Roberts. That's when the President knew he had his nominee.

I swear, when I started reading how underqualified Miers was, the first thought I had was "Wow, if that's all it takes, someone should tell Lammers that he has a shot at this job!"

Hmm. That does't quite sound right.

But seriously, if the Justices were elected, and you and her were the choices, I'd punch "Lammers" and never look back.