Indigent Journal is a new blawg out there about criminal defense. Currently, he's going nuts over an article published in The Champion (the National Association of Criminal Defense Lawyer's magazine) which besmirches those who remain in a public defender's office too long. Apparently the author reasoned that those who remain in the government's employ as PD's eventually become too close to the prosecutors and judges and, as a direct consequence of being too familiar, do not take enough cases to trial.

My Take: I am no longer a member of the NACDL. I was at one time but all I got out of it was the nicely put together glossy magazine - the same magazine which Indigent Journal is upset about. And it used to upset me the same way on the same sorts of issues. Nothing which any of us did as indigent defense attorneys was good enough. Sometimes I wondered if they'd even be satisfied if I did this: 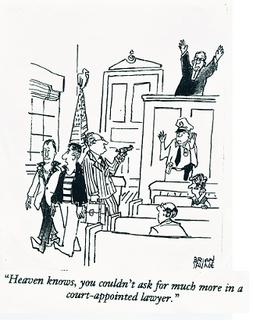 Author: Ken Lammers on 10/10/2005
Email ThisBlogThis!Share to TwitterShare to FacebookShare to Pinterest

I have worked as both a criminal defense attorney and prosecutor since 1988. From what I have seen public defenders are the more ardent of the defense attorneys. They don't have to worry about getting the retainer and any subsequent payment. I think they are more likely to take something to trial cause the client doesn't have to pay and the lawyer is getting his/her paycheck anyway. I have seen a few private bar lawyers take many cases to trial but those are in the minority.