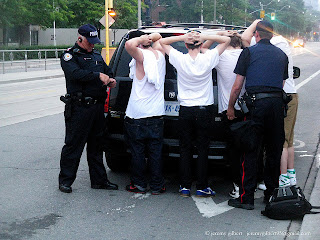 The 4th Circuit has rejected a number of vehicle related seizures and searches in published decisions this year. In particular, the 4th Circuit has expressed a concern that the government is trying to inflate minor, normal, innocent behavior and circumstances into reasonable suspicion. 4th Circuit talks about “our concern about the inclination of the Government toward using whatever facts are present, no matter how innocent, as indicia of suspicious activity.” Powell, Massenburg, and Foster, infra.
US v. Foster, MAR11, 4Cir No. 09-5161:
(1) A police officer having knowledge of a suspect's prior criminal activity does not, by itself, establish reasonable articulable suspicion of current criminal activity. (2) The appearance of a person in a car an officer had not previously seen is not enough to establish reasonable articulable suspicion of criminal activity. (3) A suspect shifting his arms around in a car is not enough to establish reasonable articulable suspicion of criminal activity.
US v. Massenberg, MAY11, 4Cir 10-4209:
(1) The fact that the suspect stands a foot away from his companions, does not look at the officer when asked to allow a search, and refuses to allow a search (when companions allow one) is not enough to provide reasonable suspicion for a search. (2) The government cannot rely on whatever facts are present, no matter how innocent, as indicia of suspicious activity."
US v. DiGiovanni, JUL11, 4Cir No. 10-4417:
(1) An officer can ask question not related to the purpose of a traffic stop as long as the questions do not extend the time of the stop beyond a de minimus amount. (2) If an officer spends over ten minutes asking a detained driver about things not related to the traffic stop before conducting investigation related to the stop, it is an unconstitutional seizure. (3) There is no specific time that a traffic stop should last, but the mere fact that it only lasted 15 minutes does not render it constitutional. (4) The mere facts that the officer handed back license and registration and said “you are free to go” do not establish that the suspect's detention ended – other circumstances pertaining at the time must be examined.
US v. Powell, NOV11, 4Cir No. 08-4696:
(1) The mere fact that someone has a record does not, by itself, justify a pat down. (2) A violent prior record can justify a pat down. (3) When the officer receives information that the suspect has “priors” for a violent criminal offense it is not enough to justify a pat down without (a) a date of the prior and/or (b) information as to whether the suspect was convicted. (4) A suspect handing an officer a license which, when checked, turns out to be suspended is not enough to justify a pat down.
____________________
Tomorrow:
Making New Common Law by Claiming Old Common Law Wasn't (Advisement)
Author: Ken Lammers on 12/13/2011
Email ThisBlogThis!Share to TwitterShare to FacebookShare to Pinterest

The sad part about all of those is an officer thought those facts established grounds for a search.

US v. DiGiovanni was especially horrible. The person's car was too clean, he had a hygeine bag in the back seat, and shirts hung up. This was reasonable to him to indicate drug trafficking?!?!?!

The trooper was fishing, he had nothing. The fact that on this stop he found something is meaningless, how many people would he have to search based on those facts to find something?

Now, on to the drug runner (he is still a drug runner regardless of conviction). He continues with the monumental stupidity of peope who know they are guilty saying go ahead and search.

Something tells me if the cop had said, while being handed the license, you know we get a lot of illegal drugs on these roads, your not carrying any are you? And then said can I look around your car just to be sure? This fool would have said go ahead.