I got to Lansing an hour earlier than check in was allowed at my motel and it was raining, so I went off to the nearest bowling alley and rolled three games. The first was a 180 and the third was a 230. We won't mention anything which purported to be a bowling game between those two. The Spare Time bowling alley was a pretty interesting place. At one end was an old-fashioned, win your tickets, claim your prize arcade. At the other end was a completely closed off bowling area which looked pretty swank (the tables in there looked to have fancy mixed drinks on them and there was obviously some sort of private party going on). There was also the typical bar which you see at all the northern alleys and outside (in front of the bar) half the parking lot was covered by barriers which kept several feet of sand in place for a beach volleyball area. Inside, every alley in the regular bowling area was covered with moms and their kids.To the left of me were 4 asian ladies and their herd of kids who were doing their darndest to disprove any stereotypes about how well behaved and quiet asian kids are. These kids were bouncing all over the place and running their mothers ragged just like any other 'murican kid even if there wasn't a word of English being spoken over there. To my right was a lady with her two sons and her 4(?) year old daughter. The daughter was using bumpers and the plastic ball roller shaped like a dragon. It was clear that this child was in charge of the entire group. Halfway through their first game she was chasing mom off after mom put the plastic roller in place. Before the game was over the girl wouldn't even let mom come up anymore. She was moving the roller into position herself, aiming it, putting the ball in place, and rolling. And she was doing pretty darn good. She even got some spares and a strike. 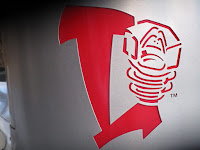 The next big event of the day was the Lansing Lugnuts. The Lugnuts play at Cooley Law School Stadium. It's a fairly generic single A stadium with a couple of exceptions. First, they seem to be building apartments onto the back of the stadium behind the outfield and over a concourse and vendor area. I may be wrong about this though. There was a sign that said something about a "Michigan Baseball Hall of Fame", but it did not state any specifics and those look an awful lot like apartments (and wouldn't that be a cool place to live?). Second, they appear to have gutted out the first three rows behind home plate. In it's place they have built a small pit where they kept the people waiting to go onto the field pregame for the first pitch (apparently half the Michigan legislature came for this purpose yesterday) and the younger kids waiting to play between inning games as they were being corralled by the older kids running the games. This was annoying and it meant my "front row" tickets weren't really front row.

The temperature was 65 degrees. 65 degrees. Yeesh. Thankfully, I had an old jacket stuffed way back in the trunk of my car. It may have been stained and smelled slightly of oil, but it kept me warm enough. Personally, I think this is Michigan's payback on me for gloating over the fact that the fans in Comerica couldn't handle a 79 degree day.

The game itself was pretty good. The Great Lake Loons were playing good small ball and moved three runs over the plate. Unfortunately for them, the Lansing Lugnuts had two 2 run homers and added a small ball run as well. The high point of the day was watching a Lugnut fielder rush a throw to first which went five feet over the first baseman's glove and drilled into the stands. Luckily, no one was hit, but I think everyone in the stadium gasped at the same time.

Tonight I'll be watching the same teams again - only this time it will be at the Loos' stadium which is wherever Midland, Michigan happens to be (apparently a little less than 2 hours northeast of Lansing).
Author: Ken Lammers on 7/08/2015
Email ThisBlogThis!Share to TwitterShare to FacebookShare to Pinterest

I don't think "Oriental" is the preferred nomenclature Dude.

You're right. I'd forgotten that somehow Oriental has gotten morphed into a word to which negative connotations have been attached. Never understood that one. I'm pretty sure that I don't have any reason to be upset if someone calls me Occidental.