This was something of a down day. I slept in a bit and the big event of the day was going out to The Ponds at Lakefront, a disc golf course which was built on the remnants of an old ball golf course. It was flaaaaaaat and a great place to practice throwing for distance and I spent about three hours on the course. The only really tricky shot was one over an old pond and that was only if you threw from the pro tee. It was a tunnel shot between trees on both banks and about 100' of lake between. I was playing the regular person tees so I had a much easier shot over a dried out finger of the pond (in fact, I overshot the basket). I got a lot of practice throwing long shots (for me) and I wish there was some place around home which I could go to and use like this place to practice bombing discs; it's possible I could develop a decent distance throw if there was. On the other hand, since most of the places back home require more control than distance I think the kind of throws which I was using yesterday might lead to me smashing my discs into a lot of trees when I get home.

Anyway, post disc golf I found another Arabic restaurant to eat at, but it wasn't quite as good as the one I went to Sunday night. Then I went back to Masri Sweets and bought more stuff I ought not to be eating. After that I wandered around Dearborn rubbernecking like all tourists do. It's interesting. You drive around and see a few signs with both English and Arabic on them and then suddenly you're in a roughly 6 block area where everything has both. There were only a couple stores I saw which only had an Arabic sign and both of them seemed to be women's clothing stores. There seem to be a lot of restaurants proclaiming in Arabic that they are Lebanese while just saying "Arabic" for us poor gringos who la narifoo al-luga.

There were little grocery stores scattered about that obviously meant to cater to the Arabic population (they all had signs proclaiming halal meat). I spent a fair amount of time trying to dredge up my linguistic skills because of one of the grocery stores. The English sign said Green Supermarket, but the Arabic said "the markets of the Mustafa"; I kept running it through my head and coming up with akdhar as green (which google confirmed on my cell). Anyway, here's a picture of the Arabic sign for those of you out there that taqra al-lugatil arabea: 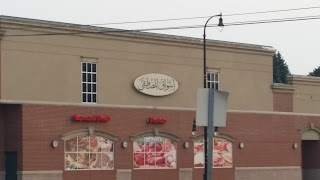 Another interesting thing to see was the abundance of hooka stores and hooka bars. Didn't stop at any as I am not a fan, but it looked a lot like it filled the slot that bars would in most places. Not that there weren't also a fair number of bars around, because there is also obviously a non-Arabic population here as well.

And that brings me to my final topic of the day. There are an awful lot of yankees up here. I mean, I expected there would be people of Arabic descent, but nobody warned me about the huge numbers of yankees with weird accents and courtesy disabilities. Of course, once you make the 20-30% rudeness allowance that you have to make for yankees in general they are all perfectly decent human beings. There are just so many of them. I've even run into a few of a truly different group of people from some place north of yankeedom which I think is called "Canadia." These people are very polite, pronounce their "o"'s very differently (omg, it's not just a stereotype), and talk about something called "hawk-key" even while they are sitting at a baseball game.

Anyway, next comes the Lansing Lugnuts game. See y'all at the game.
Author: Ken Lammers on 7/07/2015
Email ThisBlogThis!Share to TwitterShare to FacebookShare to Pinterest