Apparently, I pre-paid for parking when I bought my ticket to watch the Detroit Tigers, but forgot about it. I pulled into the first parking lot I found and paid $10. This was lot P. It was maybe half a mile from the stadium and the parking I'd pre-bought was in lot Y. If P was half a mile out, I fear that Y may have been somewhere in Outer Mongolia, so the money was probably worth it.

I hiked in and had a little trouble getting through the metal detector until we figured out it was the badge in my wallet setting it off - at which point the security guy wanding me down (who I figure was off duty working a second job) gave me a "you're a schmuck" grin and announced to the guy running the metal detector that I was okay, "It was just the big metal badge he's got in his wallet." And thus, I got passed in.

Comerica Park felt like one of those old time monstrocities which were built in the 70's, but apparently it was actually opened in 2000. That's disappointing, especially since I've been to Great American in Cincy (opened in 2003) and seen how much better a modern ballpark can be. Heck, I've been to to the home ballparks of the Charlotte Knights and Norfolk Tides (both AAA) and seen how much better a modern ballpark can be.  They spent a lot of time and money making the outside of Comerica look cool and putting up statues to make things look good instead of actually making the park work.  The facilities are woefully inadequate. Until yesterday, I hadn't stood in line to use a restroom at a baseball stadium since I went to Riverfront as a kid. There was such a lack of space for vendors that a good deal of the concourse was roped off for kiosks. They were placed immediately behind the rear seats of the lower level. A lot of well thought out stadiums now put tables or stand up bars there so that people who buy food can eat and watch the game. The only tables this stadium provided were well away from any possible view of the field. Unlike most stadiums which have monitors in the concourse so you can keep watching the game as you buy food or visit the loo, Comerica had very few and they weren't even turned on. They weren't even piping the radio play-by-play into the concourse. As well, the seating was bad. There was plenty of nosebleed seats (the vast majority of which were empty) and even the lower level seats were poorly laid out. They were neither staggered by row nor "stadium" style so that when the man took his seat in front of mine I could not see the field unless leaned to one side or the other. Most of the game I tried to position myself so that I could see the pitcher throw and the then quickly flick my eyes past the guy's head and see what happened at home plate. I was willing to forgive all this as the faults of a stadium built in the same era as Riverfront (1970) - and boy, did it bring back on deja vu of attending games at Riverfront - until I looked it up just before writing this and saw it is only 15 years old. Unbelievable.

Counterpointing all this was a tremendous group of fans. The place was filled with people and this crowd was live. They rooted for their team the entire time and even sat around joking with the rather large contingent of Toronto fans who came to the game.They held out hope for the entire game despite the fact that Toronto had the game in hand after a 6 run sixth. Detroit played sloppy with outfield errors (you catch the ball - no you catch the ball - no you catch the ball - wait, where'd the ball go?) and an easy play with a throw over the first baseman's glove stretched as high as he could get it and still be in contact with the base and more. It just wasn't their day. Even so, the crowd held throughout the entire game with very little crowd leakage prior to the game ending. I'm impressed. These are good baseball fans.

The funniest part of the day (for me) came when the two guys next to me started griping about how boiling hot it was in the stadium. It was 79 degrees and there was a breeze. I kept my mouth shut, but clearly these people have a different definition of hot than those of us from a little further South.

Post game, I went to my hotel. It turns out to be an old-fashioned really nice hotel except it is so close to the interstate that you constantly hear the traffic and the outside of the hotel is painted pink. The next step was to find my way to the nearest Arabic restaurant (Al-Ameer) and eat a good meal. Finally, I went to Masri Sweets and got two something or others which each had to have at least 1,000 calories and tasted amazing. 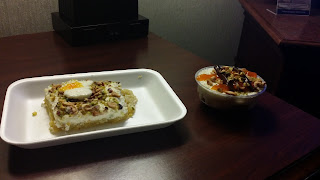 And so the day ended on an excellent note.
Author: Ken Lammers on 7/06/2015
Email ThisBlogThis!Share to TwitterShare to FacebookShare to Pinterest