Day six started by walking out to my car and seeing that someone had destroyed one of my hubcaps. I'm not sure if they broke it trying to remove it and then got mad or if they simply destroyed it for fun. It was a cheap plastic pop-in so trying to steal it made no sense. Anyway, they didn't break into the cab or flatten the tire so I guess I should count myself lucky.

The trip to Midland, Michigan was uneventful. The GPS took me through a bunch of country highways over a lot of very flat farmland. Every so often there would be a crossroads with a small store and a gas station, but not much else. Then up popped Midland. I get the feeling that there are a decent number of people around here, but they are spread out a bit.

I went and played disc golf at Chippewa Banks. It was a nice course without too many challenging pins. I played a typical "first time on the course" round with about 40% pars, 40% bogies, 10% "aw crud the pin's over there" bogies, and 10% bogies for which I can't even use that excuse. It was a flat course and about 65% of it was in the woods. At one point the path went along a 50' wide river and I thought I was going to have to shoot over it, but then it turned and led me back into the woods. All-in-all, a fun way to spend the afternoon. 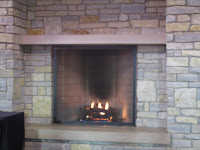 The big event of the day was the game between the Great Lake Loons and the Lansing Lugnuts. Dow Diamond is the Loons home park and it's an interesting stadium. The gate to enter the stadium is between center and right field. The stadium was fairly typical except for the fires. In the concourse, on both sides of the outfield there were open fire pits and behind home plate there was a fireplace. I asked one of the kids working the park if this had a particular reason and he told me it was just because it gets cold.

The game today was something of a defensive duel. Not a lot of hits and the only run scored on the night came in the seventh when the Lugnuts drove a run across the plate with some small ball that got a man on third and then a single to drive him in. It was a well pitched game and the crowd of Vietnam vets to the left of me and the crowd of Japanese folks to the right of me all seemed to enjoy it. After about five innings, I got up and wandered the park and finally ended up at a stand up table on the concourse behind home plate watching the last couple innings with a couple local guys. Once they figured out I was here on vacation they spent the time quizzing me about how this park compared to others and telling me about the 200 or so things I should see and do before I leave Michigan (which seemed to boil down to a lot of beautiful lakes and fly fishing).

Today I drive to Traverse City, which I believe is Michigan's answer to Myrtle Beach.  We'll see.
Author: Ken Lammers on 7/09/2015
Email ThisBlogThis!Share to TwitterShare to FacebookShare to Pinterest