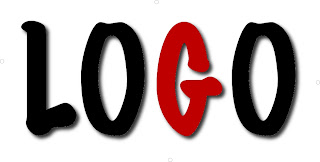 So, Scott's off haring after stupid marketing tricks again. This time it is about a kid barely out of the gates spending time worrying about and creating a logo for his two man firm. It's a never ending quest he has embarked upon to shepherd young lawyers away from the idea that glitz can make you successful rather than that boring actually practicing law stuff.

Most of the time I agree with Scott about these things (ie: you won't get clients by publishing a blog), but this time I have to disagree. I'm not disagreeing so much because he's wrong, but because I think I have to or I'd be hypocrite.

Actually, if I ever go back out into private practice I'll have one again. Let me explain.

I didn't create this logo for my law practice. It was a personal "coat of arms" I created way back when and have added to over the years. I think it may have started as a high school project. In the end it looked like this: 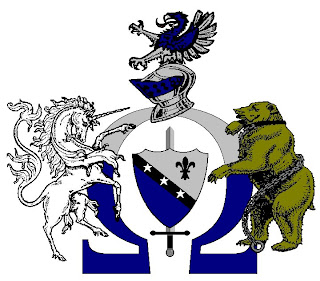 Don't ask me what all of it means. At least half of it is stuff that I thought looked cool when I was 16.

Anyway, one of the things I realized fairly early into my practice is that clients would go into court and tell the judge "Mr. Lammers said . . ." and sometimes they would go in with letters which backed up their claims, but which I did not ever remember typing. I talked to some of the senior defense attorneys about this and they told me "Sure, that sort of thing happens all the time. That's why we have pre-printed multi-color stationary. They can't fake that."

So, I went to the printer and walked right back out when the price he quoted me was about half the gross national product of Brazil. Faced with this, I went out and bought a cheap color printer. Then I figured out how to set up Word Perfect so that the logo would be on top and since nobody else had that pic and nobody would put that on their letters (as opposed to the ubiquitous scales) it made whether the letter actually came from me easy to discern.

So, you see, it was a security measure, NOT a sign of self importance or a marketing tool.

That's my story and I'm sticking to it.
Author: Ken Lammers on 3/13/2012
Email ThisBlogThis!Share to TwitterShare to FacebookShare to Pinterest