Yes, You DO Have to Tell Your Client About the Plea Offer 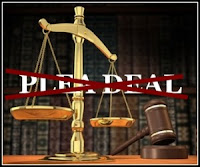 Last week there were a couple of interesting cases about plea agreements fro the U.S. Supreme Court. In

Missouri v. Frye, MAR12, USSC No. 10-444, the prosecutor sent an offer to the defense attorney to reduce Frye's charge from a felony driving offense to a misdemeanor if Frye agreed to spend more time in jail. The attorney never took the offer to his client and subsequently Frye got convicted of the felony.  In Laflerv. Cooper, Mar12, USSC No.10-209, Cooper shot at a woman's head and missed and then, while she was running away, shot at her several times hitting her below the waist. He was offered a sentence of 51 - 85 months by the prosecutor, but his attorney told him he could not be convicted of attempted murder because the victim was not shot above the waist.  Consequently, Cooper was convicted and was mandated a sentence between 185 - 360 months.  It's not terribly surprising that both Frye and Cooper claimed that their attorneys were ineffective.
In Frye the government held firm and claimed, all the way to the Supreme Court, that because there is no constitutional guarantee of a plea offer there was no constitutional infirmity when the attorney did not tell his client about the plea offer.  The Supreme Court wasn't having any of that. Justice Kennedy wrote an opinion stating that an attorney not telling his client about a plea offer is ineffective assistance of counsel and therefore violate the right to counsel under the 6th Amendment. He set forth an exact test to be used.  If defense counsel does not inform his client of a plea offer (unreasonable behavior), in order to show prejudice the defendant must show (a) a reasonable probability they would have accepted the earlier plea offer and (b) a reasonable probability neither (i) the prosecution nor (ii) the trial court would have prevented the offer from being accepted or implemented. The Court remanded to the trial court expressing reservation as to whether Frye would pass part (b) of the test because, before coming to trial, Frye got arrested for the same felony driving offense a second time.

In Lafler the government seems to have conceded that telling someone that he couldn't get convicted of attempted murder because none of the bullet wounds were above the waist is ineffective assistance of counsel.  Therefore, the Court used this case to explain what the remedies are for ineffective assistance of counsel when it pertains to plea agreements.  If the plea offer was to keep the same charge, but to agree upon a lesser sentence, then
the remedy is for the trial court to have an evidentiary hearing and (a) determine if there is a reasonable probability that but for counsel’s errors the defendant would have accepted the plea and (b) then determine whether the defendant should (i) receive the term of imprisonment the government offered in the plea, (ii) the sentence he received at trial, or (iii) something in between.  If the plea offer was to change the change the charge, such as reducing it from a felony to a misdemeanor, or there was a mandatory sentence the judge had to impose after a trial, the prosecutor must re-offer the plea agreement and the judge will hold an evidentiary hearing to decided whether to impose the plea agreement or leave the conviction undisturbed.  Ine either evidentiary hearing, the trial court may consider (a) the defendant's previous willingness or unwillingness to accept responsibility for his actions and (b) any facts of the case which came to light after the plea offer had been made.
Of course, both of these remedies break Virginian laws and Rules of the Virginia Supreme Court, but I expect that constitutional rulings coming down from D.C. trump those. It will be interesting to see the changes to these laws and Rules adjusting to these cases.
Author: Ken Lammers on 3/26/2012
Email ThisBlogThis!Share to TwitterShare to FacebookShare to Pinterest