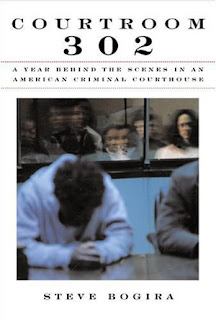 5: Touched by God - a work which makes Shakespeare look infantile
4: Amazing - Instantly began rereading it and quoting it to friends
3: Worth Every Penny - a solid, interesting read, inspiring some thought and discussion with people who share similar interests
2: I Paid For It So I Finished Reading It - Some interesting parts but if I lose the book I'm not buying another copy
1: Couldn't Force My Way Thru and Burnt the Book in order to send it to the Hell it deserves

I rate Courtroom 302 a 3.99. I didn't start to reread it instantly, but it is the best description of a busy courtroom that I've seen portrayed and it's written in a style which drives home the realities of such a court.

If you read some of the reviews at Amazon you will get the impression that this book carries a bias. I think that's right. It carries a bias toward the courtroom ideal which we all wish existed. A courtroom where there is plenty of time to explore each case in depth, where the court actually has the ability to solve the underlying problems which cause crime, where those who do a crime are always punished appropriately, and where everyone leaves the courtroom satisfied. Of course, it just doesn't work that way. Every court in the country worries about its docket and a lot of cases are concluded without anyone taking a look at the case in much more than a superficial manner. The prosecutor reads through a police report and makes an offer, the defense attorney talks to his client and conveys the offer, the defendant takes the offer because his only real concern is getting out of jail, and the judge approves the deal accepting at face value the facts as stipulated by the parties (which are the facts as the prosecutor would explain them). Then they move on to the next case. It's the way things work in the real world.

Author Steve Bogira sometimes conveys how everyone is in this system together. At other times he picks at inconsistencies he finds between the statements made by various parties and the way the way things have actually been done in the courtroom (he calls people on the kind of throwaway comments we all make which don't match so well with reality); he is able to do this because he talks to various parties involved and he often has a fuller picture of what happened then anyone else in the courtroom.

Bogira talks to and about the various people in the courtroom including defendants, victims, deputies, prosecutors, defense attorneys, and the judge. Sometimes he just accepts what people tell him and sometimes he delves more deeply into potential motives. Low level defendants did not seem to have their stories examined as closely – probably because most of them were uncheckable – but he does follow up on their failures post trial. Attorneys on both sides get a fair amount of attention as to their acts and motives. However, by far the person who receives the most attention is the judge. The reason for this is apparent; he's the person involved in almost everything that happens in the courtroom. Additionally, the judge is coming up for re-election and has a nasty, emotionally charged trial with political implications just before voting will occur. It makes for great drama, a lot of innuendo and implications as to why this or that is happening, and some directly conflicting statements as to what actually did happen between the judge and the attorneys. And, oh yeah, throw in a Mob family to boot.

Altogether, it's a very good read which I recommend to both lawyers and lay persons.
Author: Ken Lammers on 4/18/2007
Email ThisBlogThis!Share to TwitterShare to FacebookShare to Pinterest

I agree the book is decent. For an insider's view of the Cook County Criminal Courts I woulld recommend "Defending the Damned" by Kevin Davis. It puts some great color on the PD's Murder Task Force and the types of cases that they find themselves defending. The broad range of fiction largely deals with super cops and prosecutors with a smattering of slick, over-sexed defense attorneys. Quite frankly, its all a bunch of b.s. I say this as an active defense attorney. The areas are very grey without the black hats and white hats. Damned does a nice job of telling the story of some truly interesting women and men who perform a truly thankless job. For Chicagoans, check out this blog cccrimcours.blogspot.com

It's new and could use some ebb and flow.