The Second Amendment Shan't be Delayed Until 21

Plaintiffs seek an injunction and a declaratory judgment that several federal laws and regulations that prevent federally licensed gun dealers from selling handguns to any 18-, 19-, or 20-year-old violate the Second Amendment. We first find that 18-year-olds possess Second Amendment rights. They enjoy almost every other constitutional right, and they were required at the time of the Founding to serve in the militia and furnish their own weapons. We then ask, as our precedent requires, whether the government has met its burden to justify its infringement of those rights under the appropriate level of scrutiny. To justify this restriction, Congress used disproportionate crime rates to craft overinclusive laws that restrict the rights of overwhelmingly law-abiding citizens. And in doing so, Congress focused on purchases from licensed dealers without establishing those dealers as the source of the guns 18- to 20-year-olds use to commit crimes. So we hold that the challenged federal laws and regulations are unconstitutional under the Second Amendment. Despite the weighty interest in reducing crime and violence, we refuse to relegate either the Second Amendment or 18- to 20-year-olds to a second-class status.

Yes, that's a published opinion. Interestingly, if service in the militia is key in Virginia § 44-1 makes everyone 16 years old a member of the militia and liable to provide their own weapons when mustered.

Author: Ken Lammers on 12/12/2021 No comments:
Email ThisBlogThis!Share to TwitterShare to FacebookShare to Pinterest

Can a Criminal Victim Limit a Prosecutor's Access by Hiring an Attorney?

It's always a concern when your State Bar announces it is going to issue a Commandment Writ in Stone . . . er, Legal Ethics Opinion that might affect you. Right now, the Bar in Virginia is taking comments about a possible new ethics rule (1895) about whether prosecutors can talk to victims of a crime. Let's take a look, shall we?

[COMMENT]  That is an incredibly limited question and should only impact a very narrow sliver of cases. It's rare that a victim is suing the person who committed the crime against them. The defendant would either have to be rich unto himself or be acting under authority of another who has significant funds (for instance if the defendant was a fireman/policeman/social worker who broke the law while representing his agency).

The Bar's Answer: If the victim is represented by an attorney who claims to represent the victim in both a civil case and the criminal case the prosecutor cannot talk to the victim EXCEPT to address issues specifically required in statutes and the Virginia constitution.

Why the Bar is Wrong

Things to be considered (in order of primacy):

A. If any person without just cause knowingly obstructs . . . attorney for the Commonwealth [or] witness, . . . in the performance of his duties as such or fails or refuses without just cause to cease such obstruction when requested to do so by such . . . attorney for the Commonwealth [or] witness . . . he is guilty of a Class 1 misdemeanor.

(2) Case law clearly requires a prosecutor to maintain control of her case. Counsel hired by the victim cannot direct the case.  In fact, a private prosecutor representing someone with a civil interest in the same circumstance (a) violates Due Process under the Virginia Constitution and (b) requires no showing of prejudice on the defendant's part for reversal of a conviction. Cantrell v. Commonwealth, 229 Va. 387 (1985) & Riner v. Commonwealth, 268 Va. 296 (2004).

(3) Virginia Ethics Rule 4.2:  In representing a client, a lawyer shall not communicate about the subject of the representation with a person the lawyer knows to be represented by another lawyer in the matter, unless the lawyer has the consent of the other lawyer or is authorized by law to do so.

(4) Comment 9 to the above Rule:  Concerns regarding the need to protect uncounselled persons against the wiles of opposing counsel and preserving the attorney-client relationship may . . . be involved where a "third-party" witness furnishes testimony in an investigation or proceeding, and although not a formal party, has decided to retain counsel to receive advice with respect thereto.

Analysis: Let me be fair and state that as a pure analysis of Rule 4.2 the Bar has a proper, but flawed answer. Ethics rules and opinions cannot exist in a pure state - untouched by the taint of actual law and practical reality. As the Bar recognizes in the very first sentence of its analysis, if the victim is represented merely in a related civil matter, the prosecutor is fully able to communicate with the victim. However, the question is framed so that the attorney represents the victim in both the civil and criminal case. The Bar conducts its analysis from this flawed premise.

The flaw in the Bar's analysis is that the civil lawyer is forbidden from influencing the criminal case in a manner meant to bend it to the desired civil result.  Cantrell & Riner supra. This comes out of case law - not a Rule - and therefore has precedential authority over Rule 4.2. The only possible way the Bar can defend against this would be to say that these cases refer only to private prosecutors, not to an attorney attempting to manipulate the course of the criminal trial by denying the prosecution access to the victim. Remember, in the question presented by the Bar the victim's attorney is acting "with a goal of advancing the victim’s interests in the civil case." In other words, the attorney wants to deny the prosecution access to the victim (her client) because she believes (or fears) that such access will lead to or allow a prosecution strategy damaging to the civil case.

Worse for the attorney, denying the prosecutor access to the witness because it could impact a civil case isn't anywhere near "just cause" and therefore makes the victim's attorney a criminal for obstructing justice. § 18.2-460 is black letter law written in the books. It definitely has precedential authority over Rule 4.2. Just imagine the trial: "Ladies and gentleman of the jury, I didn't let the prosecution have access to my client in the Childsroth murder case because we were going to make a lot of money suing the murderer."

Conclusion:  Effectively, the Bar's proposed ethics opinion would only add an extra step in those almost vanishingly few cases it would apply to. The prosecutor would have to call the victim's attorney to ask to speak to his client. The victim's attorney would by law be required to say "yes."  The Rule accomplishes nothing legally except to create a technicality.

Caveat: Remember, this is not a situation (as presented in the question) were the victim faces actual or possible charges herself. In such a case, the victim's attorney would play a legal and practical role in either protecting his client from incriminating herself or negotiating terms under which his client will cooperate and testify (use immunity, derivative use immunity, etc.). Reading Rule 4.2 and comment 9, this seems to be what the rule is tailored for in criminal cases.

Author: Ken Lammers on 10/20/2021 No comments:
Email ThisBlogThis!Share to TwitterShare to FacebookShare to Pinterest

Starting Back In with the 'vid

We've been required to wear masks again this week even if we did the right thing and got our shots. Here are the stats: 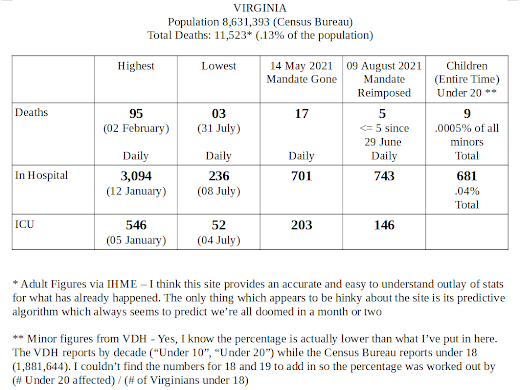 Author: Ken Lammers on 8/10/2021 No comments:
Email ThisBlogThis!Share to TwitterShare to FacebookShare to Pinterest

This is my update as given to the local bar. The officers got a different update because they didn't need as much of an update on sentencing issues. When I did this I'd updated several departments and the parts I'd gone over with them are the smooth parts. The parts where I'm really umm umming are the ones I'd not done until this day.

Author: Ken Lammers on 7/01/2021 No comments:
Email ThisBlogThis!Share to TwitterShare to FacebookShare to Pinterest

High Point of the Day

I just heard a defense attorney ask a witness if he had “ever been convicted of a crime involving lying, steating, and chealing?”
Author: Ken Lammers on 3/18/2021 No comments:
Email ThisBlogThis!Share to TwitterShare to FacebookShare to Pinterest
Newer Posts Older Posts Home
Subscribe to: Posts (Atom)