The Actual Power of the Bar: Part Five 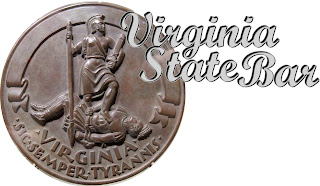 Now we're down to Article 7 under Chapter 39 of Title 54.1; in other words, it's the last article under the chapter governing lawyers as a profession. This one governs the solicitation of clients. Anyone who has turned on a TV in the last twenty or thirty years has to realize that the various Bars have lost thier fights to keep lawyers from soliciting clients thru advertisements. That doesn't mean the laws against solicitation through a salesman have gone away, although all we're going to do today is look to see what powers the Bar is granted under them.

Surprisingly, it's not much. In fact, most of this article is handled through the criminal law and there's only one reference to the Bar in the entire article:

§ 54.1-3939 gives the Bar, by inference, the ability to approve legal aid plans and lawyer referral plans.

Author: Ken Lammers on 5/13/2022 No comments:
Email ThisBlogThis!Share to TwitterShare to FacebookShare to Pinterest

The Actual Powers of the Bar: Part Four

Article Six is the part of this Chapter which lays out disciplinary procedures for attorneys in Virginia which fail to follow the Supreme Court's ethics rules.

§ 54.1-3935(A) creates by reference hearings before the Bar Disciplinary Committee. It also creates by reference a district committee and hearings before it. It allows either an attorney or the Bar to bypass either of these hearings and present the case to a three judge circuit court. It cedes the power to determine how this bypass will work to the Supreme Court's rules. Thereafter, it requires the Bar to file a complaint in the appropriate jurisdiction.

[Thus, by implication the Bar is allowed to have some sort of proceedings, but the lawyer can escape them.]


§ 54.1-3936(A) allows Bar Counsel to ex parte petition a circuit court to cause a lawyer or firm to produce evidence if she has "reasonable belief" the lawyer is doing something  (1)(a) unlawful,  (b) or violating the ethics rules that will  (2) cause someone to lose property.

["Reasonable belief" has been read by Virginia courts to actually fall under the reasonable articulable suspicion standard.  See Bagley v. Commonwealth, 73 VaApp 1, 13 (2021)("if a police officer possesses a reasonable belief based on specific and articulable facts that reasonably warrant..."]

§ 54.1-3936(B) allows Bar Counsel to petition a circuit court if she has "reasonable cause" the lawyer is doing something  (1)(a) unlawful,  (b) or violating the ethics rules that will  (2) cause someone to lose property.  The Bar Counsel's petition can seek to:

(4) Get a receiver appointed to take control of the attorney's funds and property of the lawyer's (or firm's) practice.

["Reasonable cause" would seem to fit naturally under probable cause.]

§ 54.1-3937(A) - Allows, by inference, Bar Counsel and district committees the power to file compliants to a circuit court against legal firms that are violating ethics rules or laws pertaining to law practice entities.

§ 54.1-3938.1 creates by reference a chair and vice-chair of the Virginia State Bar Disciplinary Board. By inference, it allows Bar Counsel to apply for a subpoena to gather evidence for another State's discipline or disability proceedings. It further gives the chair and vice chair the power to issue subpoenas to require testimony and document production for the foreign Bar.

That is it for the statutes describing the Bar's role in suspensions/revocations of attorney's license to practice law. It is disturbingly incomplete.

Next time we'll look at the last set of statutes having to do with lawyers: Article 7: Solicitation of Professional Employment. I won't cover how that's mostly been rendered moot by the 1st Amendment and the US Supreme Court; I'll just be looking at the statutes to see what powers have been assigned to the Bar in this area.