As Steve was kind enough to point out, one of our beloved Virginia Legislators has decided to apply for the job of deputy in Mayberry, North Carolina. Of course, in N.C. they'll limit him to one bullet and make him keep it in his shirt pocket, but that's probably a good idea for someone who fires off an accidental round in his office in the capital.

Let's go through what must go wrong in order for this to happen. First, a round must be chambered. Second, the safety must be off. Third, his finger had to be on the trigger; I suppose a poorly designed pistol might set the round off if the user slipped while trying to clear the weapon and released the bolt, smashing it down on the round (hopefully a legislator would have a better weapon than that). Fourth, he had to be holding the weapon up and aimed at the door of his office. If you're going to clear a weapon - and you're not able to point it at the ground - it is always a good idea to have a bucket of sand around to point it into (a coffee can works).

Delegate Reid, maybe the answer is to go for the handheld weapons. For instance, I am pretty well stocked up to handle matters at my office: 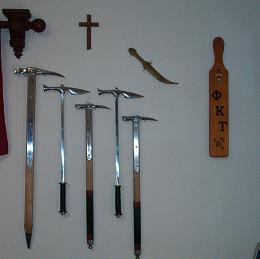 Well, you might want to avoid the khanjar. It has to be unsheathed and that does leave the possibility of pulling it out too quickly or with too much force and causing it to fly across the room. I think you should probably avoid anything that complex for the time being.
Author: Ken Lammers on 1/27/2006
Email ThisBlogThis!Share to TwitterShare to FacebookShare to Pinterest