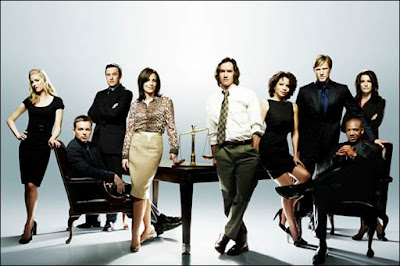 Before this show hit the air there was a lot of buzz about it in the crimlaw blawgosphere because of the involvement of David Feige. Then the pilot aired. I didn't write a review at that time because I missed it when aired and had to watch it later. Additionally, when I finally watched it, the pilot was bad. It was very bad. All the important characters were ridiculous and the soap opera built into it was just silly. I decided to wait until I'd seen a few episodes (there's nothing else worth watching at that time period since Middleman went off the air) before I wrote a review.

It was the right thing to do. The show has gotten better. I still don't like the characters, but the story in episode 3 was far closer to the actual courthouse experience and actually came much closer to hitting home. It's still a very imperfect show. Nevertheless, it seems to be moving in the right direction. I'm going to give it a rating of cautious approval. Right now its an adequate show. It may turn into a very good show; it may still tank.

1: SKIP THIS EPISODE. It doesn't really set anything up that you need to watch the next two shows and it could sour you for the others. We see several rather obnoxious characters acting in obnoxious ways, often unnecessary for the plot. i.e. Why the scene between the head prosecutor and the female prosecutor?

The basic story here is a judge forcing a rape case to trial despite the prosecutor and defense attorney agreeing to plea agreement. There's a very bad id procedure undertaken by the detective. The prosecutor's office also hides the fact that it has evidence that the accused rapist is innocent. In the end one honest prosecutor brings that evidence to light and the accused's defense attorney goes to jail in order to keep his client from being unjustly punished.

2: There are two legal stories in this episode. In the first, the evil prosecutor tries to keep a witness who is from outside the country from getting into the country because the witness would prove the defendant not guilty. In the second, a black kid is accused of accused of battery of a white kid over a situation an upset girlfriend had selfishly set in motion. The second story was by far the better because it felt like a real trial.

3: This episode felt the most like what actually happens in court. Again, there are two legal stories. In the first we see a defense attorney desperately trying to find some sort of treatment program for his mentally ill client in order to avoid trial. The second is a trial over some sort of disorderly conduct/battery by a frustrated woman on a guard at a social services/unemployment agency. I'm sure the first story struck home with anyone who has fought a desperate, frustrating and ultimately fruitless battle to do something to help a mentally disturbed defendant. The second story started out strong but faded. I kept expecting the defendant to try to manipulate the situation to her advantage and refuse the solution offered by the defense counsel because it wouldn't get her out of jail. It would have been more realistic.

The Good: By episode 3 this has gotten far closer than I've seen anything get to how indigent defense works.

Concerns: I hope the background soap operas fade away. They are a distraction and do nothing to help the interesting parts. I fear they will actually become a greater part of the series, moving the series into a grittier version of LA Law.

The Bad: The series fails what I'm going to call the "My Cousin Vinny Test." If you've listened to the director's narration on My Cousin Vinny you've heard him explain that what he set out to do was to set up a situation wherein everyone was acting in good faith with honest belief.

No one in the PD's office is acting in bad faith. However, the same cannot be said of the judge or the prosecutor's office. An example of this is in the last episode's mentally ill storyline. A young prosecutor is concerned over whether he should prosecute the mentally infirm individual. The chief prosecutor basically tells him to suck it up and go convict the guy because it'll cause bad press and affect tourism if he does not. Really? Why couldn't the chief prosecutor give a more valid answer along the lines of "We don't have perfect tools. Our job is to protect the citizens of this city. If we can do that and help correct the defendant fine. If we cannot we must still protect the citizens, even if all we can do is just keep this guy put away where he can't harm anyone."? This underlying theme of bad faith hurts the stories. 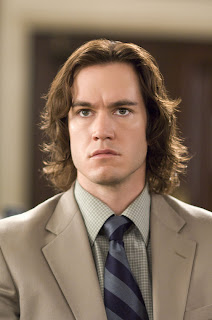 Jerry is the primary protagonist. He is true believer, driven nearly mad by a system he sees as terribly flawed, and seems to get an inordinate number of innocent clients who are being ground under by an unjust justice system. So far not one of his clients was guilty. Not a single one.

In five years Jerry will be burnt out, or an alcoholic, or have left the office in disgust, or gone postal, or he'll be that guy who everyone in the Bar hates and avoids. In most cases a guy like Jerry hurts his clients because the judges stop listening to him and start punishing his clients just because they had the bad luck of having him appointed to represent him. However, in this series he is somehow successful. 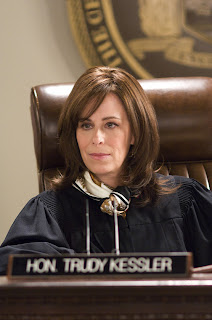 Judge Kessler is venal, rude, self absorbed, and stoopid. Her main concern seems to be getting elected district attorney, not offending the voters or the judicial inquiry board, and making sure defendants (who are all guilty) go to prison for as much time as possible. We've all stood in front of judges whom we've given nicknames like "Hang-em High Harry", "Maximum Mike", or "No Chance Nader" these judges play the game well enough not to say things before even scheduling a sentencing hearing like "I warn you that I'm going to sentence your client to the maximum sentence." They just do it.

Oh, BTW, she's also having an affair with her clerk; said clerk is presented as calling all the real legal shots from behind the scenes - at least those which require any kind of thought or compassion. 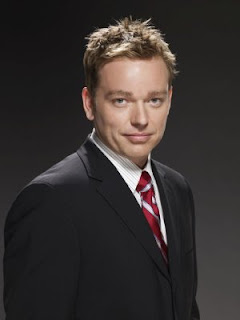 The Gay Law Clerk - I can't even remember the name of this guy because he is imprinted in my mind with the title supra. He's sleeping with the judge and maneuvering to get her position on the bench after she becomes DA. He also seems to be the power behind the bench, steering the judge to her few sane moments. In his spare time he goes down to the local gay clubs and picks up random guys.

This has storyline disaster written all over it. It is the biggest threat to cause the soap opera to overwhelm the legal stories. There's already one guy he's slept with in position to blackmail him. 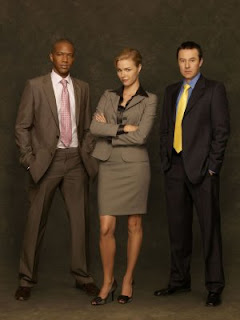 The guy on the left is the honest, very talented, smart prosecutor. So far, he's been the one voicing ethical concerns and playing everything straight. I admit that I'm wondering how long that will last.

The gal in the middle was sleeping with Jerry in the first episode, but that all ended during the second episode when she went so far as to deport Jerry's witness because he was going to prove that Jerry's murder defendant was not guilty.

The guy on the right is the chief prosecutor. I don't think he's supposed to be the DA, but I'm not sure. He's a huge sexist, win-at-all-costs, evidence hiding, morally corrupt jerk. He hid the fact that there was evidence that the accused in episode 1 was not guilty of rape in order to protect a conviction and would have gotten away with it if the guy on the left hadn't know about it and passed the information along.

The Head PD. Not much to say about her so far. She's mostly just been filler so far and the object of the Rich Kid's lust. 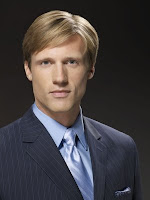 The Rich Kid: His name is actually Richard and he is (or at least his father is) extremely wealthy. His legal stories have been the secondary stories. As such, there hasn't been as much license taken with them and they have come across closer to reality. I keep waiting to see defendants try to manipulate this guy. He just looks like the angst-driven, rich kid who they would decide they could manipulate because he doesn't have experience in their down and gritty world. He looks like low hanging fruit and it would be interesting to see him go through the experience of toughing up.
The Clients: So far, these may have been the most disappointing part of the show. They've all been grateful, cooperative, and friendly. In reality some defendants are like that. Others aren't. Where are the jailhouse lawyers with strange ideas who won't believe the attorney? Where are the guys who refuse to listen to advice? The ones who demand jury trials despite overwhelming evidence? The defendants who try to con the defense attorney with a bad story (or even out of his own money)? The ones who accuse the defense attorney of being on the side of the judge and prosecutor? The mothers, girlfriends, and others who blame the defense because the defendant gets convicted of a robbery he was videotaped doing (if we'd had a paid lawyer . . . ) Where's the guy who is so obviously trying to do things before and during his trial to set the defense attorney up for a habeas or Bar complaint?
Author: Ken Lammers on 9/16/2008
Email ThisBlogThis!Share to TwitterShare to FacebookShare to Pinterest

That was an excellent review. I saw episode 1, fell asleep 15 minutes into episode 2 and missed episode 3. Now I'm all caught up.

BTW, I think I know who the judge is, but I'm awaiting confirmation from Feige. So far, he hasn't said, so if he shows up here, press him on it.

I totally agree with your review and comments. When I watched the (much anticipated) pilot, I was VERY underwhelmed. It seemed like Beverly Hills 90210 - Public Defender Edition. Acting: BAD, Story: Predictable, Saved By The Bell Guy's hair: Long and girly.

But, buy the second episode, they had tightened things up a little and by the third, it was much more watchable.

Mark-Paul Gosselaar's hair looks terrible in this show. It's all wrong for him and it's wrong for his character.

The perky blonde ADA: terrible acting. She does not look like a prosecutor in any way, shape or form.

This is what Bochco has succumbed to? Did he lose his ability to write exciting drama after NYPD Blue? Evidently so.