"Holier Than Thou" / "There But For the Grace of God"

Sherry Colb has an article about what I think most of us who practice criminal law would recognize as the "those people" attitude. She gives it her own spin, calling it the "holier-than-thou effect." Basically, it is the inability of people see themselves as a person who would fail in situations where they were tempted - through chance, fate, or desperation - to break the societal compact as embodied in the law.

Ms. Colb goes further identifying 4 purposes to criminal law: retribution, deterrence, incapacitating offenders, and rehabilitation. She identifies retribution as the primary focus of the American system based upon the lack of rehabilitation programs in prisons in combination with rapes and gangs. Then she concludes that locking someone away in this situation, away from law-abiding citizens is a bad thing, so that shorter sentences are most likely preferable.

Indeed, the situation-dependent nature of behavior counsels against surrounding a person convicted of wrongdoing with other criminals for long stretches of time, during which he will be almost entirely cut off from what lawful behavior in civilized society looks like. Shorter and less brutal sentences, coupled with humane and educational transition opportunities for former prisoners, could yield better results for everyone.

To take into account the holier-than-thou effect might also facilitate the forgiveness necessary to our ability to think logically about the problem of crime. If we are filled with rage and hatred, it will be more difficult for us to imagine, and thus to allow, that someone who committed a bad act in the past might soon become (or might even have already been) a contributing member of society.

This article struck me as wrong in many ways, but I'm just going to concentrate on one here: Ms. Colb badly overestimates the effect of "holier than thou" on the system. Our system is far more dominated by the "there but for the Grace of God" thought process.

Here's a graphic of how I've observed the punishment of offenders in the time I've been practicing. 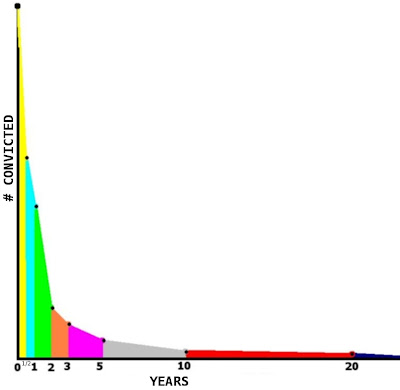 I've tried to be a little conservative in my estimates for this chart. In reality I think that the downward slope is more severe. However, I don't have actual figures, so I adjusted by assuming higher numbers of more severe punishments. In any event, it gives a true view of how offenders are actually punished.1

Why is there such a severe downslope? Because the greatest number of offenses are treated with mercy. People just don't get thrown in jail for reckless driving, DUI, writing a bad check, or most misdemeanors the first time they are convicted (without aggravating circumstances). There's a good chance they won't go to jail for a second or even third misdemeanor conviction, particularly if they are different types (driving suspended, bad check, assault and battery). Furthermore, there's a whole slew of felonies wherein the first conviction will only get an offender probation.

Next come the convictions which should lead to incarceration, but do not because they are somehow diverted. Sometimes this is just having a case continued to be dismissed if there are no problems for a year. In other cases there are drug courts, shoplifting classes, anger management programs, and/or community service given in lieu of incarceration.

Then come the minor incarcerations. I don't know how many offenders get a couple days in jail or 10 days or 3 months, but I lay odds that by far the largest number of incarcerations fall within that range. Misdemeanor courts hand out punishments such as this daily and any misdemeanor court which has significant numbers of defendants appearing before it probably hands out several a day. Felony courts hand out incarcerations in the "up to 6 month" range all the time to offenders with prior misdemeanor records or their second or third felony conviction.

Even for those who actually have incarceration imposed there are mitigations against its effect. Most commonly these mitigations include serving time on days off of work (weekend time) and getting work release. However, it can also include things such as delayed reporting to jail, furloughs while in jail, or home incarceration. Even failing all of this, most every incarceration system has some sort of "good time" so that if the offender behaves he is not required to serve a certain amount of his sentence.

In my experience, to get more than a year an offender has to have a prior record, have committed multiple offenses, have committed a violent felony, or violated a particular law (firearm with drugs, 4th DUI, use firearm in felony). To get more than two years incarceration an offender usually has to combine two or more of these elements; 3 to 5 years usually requires even more of a combination of these elements. To get above 5 years the offender usually has to do something significant: armed robbery, rape, murder, etc. It may not be impossible to get above five years without having committed a major violent felony, but it'd be mighty hard (unless in a State with a very strict 3 strikes law). The most I've seen an offender convicted of larceny or the like get in Virginia is 5 years and even then it was a departure above guidelines.

Somewhere between 1 to 3 years of potential actual sentence comes the point at which mercy stops being an option. Even at 3 years a judge in Virginia can order the Department of Corrections to have an offender entered into a specific drug treatment program run in the prison. Still, there must come a point at which the tendency toward mercy must be overcome by obligations to the citizenry at large.

In these more serious offenses retribution, deterrence, and incapacitation are all tied together. A robber whom a jury sentences to 10 years in retribution is incapacitated for those 10 years and serves as a deterrence for those who consider following in his footsteps. However, when we consider the system as a whole, we must conclude that the system serves more of the purpose of deterrence and incapacitation. After all, no one really gets recompense (outside of restitution) in a criminal case. Retribution is at heart a distributive justice theory and no victim can have that which is taken in a rape or shooting actually returned by putting the other person in prison. At best, if one thinks that recompense can be made by putting someone in prison, the only person(s) brought back to equilibrium is the victim. For the rest of us it matters not whether the victim is made whole. For the vast majority of people the only effects are the protection of society through the incapacitation and deterrence.


----------
1 Please note that most of this is modeled on Virginia's judicial system and the sentencing guidelines in place in Virginia.
Author: Ken Lammers on 5/18/2009
Email ThisBlogThis!Share to TwitterShare to FacebookShare to Pinterest

How does this tie in with the fact that the U.S. incarcerates far more than the baseline for other countries? Do you think we have that many more bad actors, on an objective basis, than Russia or South Africa?

My guess is that high admission rates for persons serving short sentences for offenses that used to result in probation or a jail sentence is the primary reason for the large US incarceration rate.

That's really interesting. Can you share your source of information there?

It jibes with my general feeling that there has been an increase in measures that increase the number of people interacting with the incarceration system have been on the rise alongside of other measures (the rather notable asset-forfeiture laws in some states, etc.) that seem revenue based rather than something coming from a sincere concern with public safety.

In my study of the history of incarceration I used the following data sets
1) The prison population from 1898 to present.
2) Annual prison snapshots.
3) Annual prison admission reports by gender, race/ethnicity & offense type.
4) Crime rate histories (1960 to present)
5) Criminal code history.
6) Depopulation history of state mental health hospitals (5,500 in 1955 to 200 at present).

I forgot to mention that the largest state mental hospital in Iowa is behind prison walls. There have always been mentally ill persons in prison but other than special security arrangements for many years they received no special attention or treatment.

I have not been able to determine when they realized that there were a lot more mentally ill prisoners than normal.

My wife was found guitly of embezzelement of 17,000 .3 counts Jury gave her 7y 6 mths in prison on each count 23 years total. she is 40 so 63 is how old she will be. This is in VA. Took her life and mine for 17,000 and I paid the money back before court.FBI handwriting said it wasn't her writing. You can take a life and get less time but take money give ya death row!!!!!!!!!