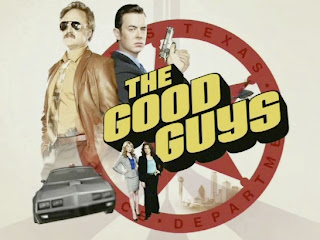 5 Second Review: The pilot is fun to watch, but we'll see if the concept can last.

30 Second Review: I really enjoyed watching the pilot on Hulu. It was carried along by its primary actors who make the ridiculous story and hackneyed story fun to watch.

In Depth: This is a send up of the traditional cop drama. Colin Hanks plays the young cop who is far too much by the book and gets himself in trouble because he can't keep himself from telling his superiors what they are doing wrong. He gets assigned to babysit a drunk older cop who is untouchable because once upon a time he saved the governor's son. The older cop, played by Bradley Whitford, stumbles through life with a cheesy 80's mustache (almost Tom Selleck in its epicness) in a semi-drunken haze, constantly complaining about how things aren't as good as they used to be, and assuming that every case he's involved in will turn into a major case. The thing is, the kid and the old-cop are assigned to the most trivial theft cases their boss can find for them. And yet, they keep ending up in a room with the second best assassin in the world . . .

It's a fun concept executed well. That will work well for a show or two, but it's going to have to evolve into something more in a short period of time to keep my attention. I hope it does.

Monday Nights at 9:00 p.m. on Fox.
Author: Ken Lammers on 6/07/2010
Email ThisBlogThis!Share to TwitterShare to FacebookShare to Pinterest

I gave it a shot for three shows, but I’m through with it.