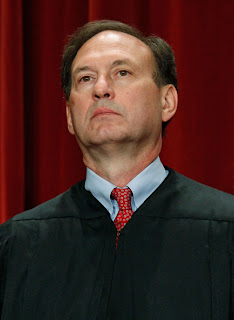 I was just putting together my summaries of last month's cases and read Howes in depth for the first time. It's a Habeas case rising from State courts. Therefore, all that a federal court need do to reject it is to find some scrap of law that supports the assertion that there is enough flux in federal precedents that there is no extremely clear  constitutional rule the State court has violated.

In Howes, Alito does this by characterizing a clearly set out rule as dicta and then pointing to other dicta which uses to counter the rule. Having done this, his opinion ends. Right? No, of course it doesn't. He then goes on to bloviate on the rule as he wishes it to be (can't have short concise opinions). And here's my summary of his dicta:

Howes v. Fields, FEB12, USSC No. 10-680:
(1) The fact that (a) no charges have been filed on the subject the officer is questioning the prisoner about and (b) the prisoner is not being held on a charge related to the subject of the questioning do not mean the prisoner is not entitled to Miranda warnings. (2) The fact that a prisoner is (a) imprisoned, (b) questioned in private, and (c) questioned about events in the outside world does not mean that he is in custody for Miranda purposes. (3) Detention alone is not enough to establish custody for Miranda. (4) The fact that a prisoner is imprisoned is not enough to require Miranda because (a) a prisoner will not be suffering from the shock of recent arrest, (b) a prisoner is not likely to be lured into speaking in hopes of prompt release, and (c) a prisoner knows the officers questioning him lack the power to reduce the duration of his incarceration. (5) Questioning a prisoner in private does not require Miranda warnings because he is merely being separated from prisoners, not friends and family. (6) Questioning a prisoner about something that happened outside the walls of the prison does not require Miranda warnings because it has just as much potential for criminal liability as questioning about events inside the walls. (7) When a prisoner is unrestrained and told he can leave and go back to his cell when he wishes there is no custody for Miranda purposes.
Author: Ken Lammers on 3/06/2012
Email ThisBlogThis!Share to TwitterShare to FacebookShare to Pinterest