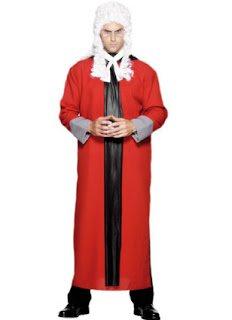 Via SL&P, I came across a post by James Dole in which he proposes that prosecutors be split into two groups with different functions.  Basically, he posits one group which negotiates plea agreements and one group which prosecutes those cases which go to trial. Personally, I think he is onto a good idea, but he needs to expand his vision. If we're going to go there we need to do it for the entire system, not just the prosecutors.

To begin with, we should just dump the whole idea that lower level courts are adversarial.  Make the lowest level court an "Investigative Court" which has no jury and handles misdemeanors (maximum punishment 6 months), preliminary hearings, and plea bargains. Let's call the person who presides over this court a "Commissioner." Commissioners participate in the investigation and are the individuals who issue warrants, investigative subpoenas, and perform any other function a judicial officer might perform. However, their function is not to be a neutral arbiter; their job is to guide the search for truth.

Finally, the attorney for the defendant would be a "Counselor."  He would not represent the defendant; instead, his job would be to inform the defendant of his rights, explain the charges, and explain the plea offer which the Inspector has offered. In misdemeanor cases the Counselor would not argue the case, but he would stand beside his client and be able to interact with him in order to answer his questions and give advice as to how the defendant should proceed.

The "Trial Court" would be entirely adversarial.  It would handle felonies in which the defendant refused the plea offer and de novo trials of misdemeanors if the defendant chooses not to accept the decision of the Investigative Court.  Since a primary principle of the Investigative Court will be that nothing can be finalized there without the defendant's acquiescence, a conviction on a misdemeanor could be appealed to the Trial Court.  However, in order to avoid abuse, the maximum punishment of a misdemeanor if appealed would become 12 months.

The Judge in the Trial Court would be neutral arbiter. No one who had served as a Commissioner would be eligible to serve as a Judge. Additionally, a Judge would be required to have served at least five years as a Advocate for the Defense and five years as an Advocate for the State before he would be qualified to take his seat. Judges would make rulings on the constitutionality of actions, both those solely performed by officers and those performed by the officers in conjunction with the Investigative Court (dispensing with the pure fiction of Leon that judges' behavior would not be affected if the warrants they sign off on are suppressed).  The Judge would preside over jury trials, bench trials, and guilty pleas (you can't prevent a defendant from pleading guilty).  If a jury trial is taken, the Judge will decide legal issues and give jury instructions which he created.  Jury selection should be simplified, with peremptory strikes eliminated. As well, jurors should be limited to those who are employed, retired because of age, or own their own business. If the defendant is found guilty in a jury trial the jury will decide his sentence.  If a defendant is found guilty via a bench trial or guilty plea the judge must sentence the defendant to the average sentence which juries have sentenced defendant across the State or up to set number of years more than the plea offer, whichever is greater. The set number should vary depending on the severity of punishment offered by the Inspector.  If the offered plea offer was less than five years the Judge could add an extra year; if greater than 5 but less than 15 the Judge could add 3 years; if greater than 15 the Judge could add 10 years.

Attorneys in the Trial Court would be "Advocates." The Defense Advocate would argue constitutional issues, speak for his client at trial, and argue for his client during sentencing hearings. Basically, she'd do what any defense attorney does now except she would not negotiate for a plea agreement. The State Advocate would have the same, although reciprocal, role as the Defense Advocate except that he would be shorn of one additional duty.  He would not advise law enforcement as that is the Inspector's job.

I think this would be pretty close to the perfect criminal justice system. It would be interesting to see how this system would affect the ratio of pled to tried cases.


-----
Note: No, I did not go with the "solicitor" / "barrister" names. They're quaint and British and anglophiles love them, but I think we should go with names that say what they mean and mean what they say (it's the American way).  Reanimating those titles would just be a way of trying to puff lawyers up.
Author: Ken Lammers on 5/03/2012
Email ThisBlogThis!Share to TwitterShare to FacebookShare to Pinterest

Very nice blueprint for a proper justice system.
B
U
T
Emmanuel Kant:
Out of the crooked lumber of Mankind no straight structure can be built.

Nice blueprint, go get the lumber.