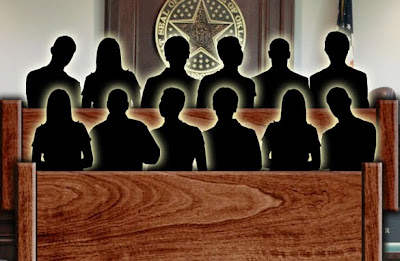 In TV shows and movies we are always shown attorneys working late into the night preparing their closing arguments so that the next day they can go into court and win the trial for the good guys. This bit of fiction never seems to play out that way in reality where I feel pretty darn lucky if I get 10 minutes to gather my thoughts and start my closing. However, there is one place where the attorney has plenty of time to craft his message: the opening statement.1

So, how does one go about crafting an opening statement?

Well, let's first address the major error that I see from lawyers old and new. There are so many lawyers who write the whole thing out and either memorize and recite it verbatim or, worse, read it to the jury from their notepad. We've all seen it. The guy who is so obssessed with saying it exactly right that he is staring over the jurors' heads as he reels off his opening just like he did that Shakespearean passage he was required to memorize in high school.2 This is only topped by the guy who never even looks at the jury as he reads his perfectly crafted opening in a flat, monotonous drone. Don't be one of these people. Please, don't be one of these people.

In fact, don't ever write your entire opening down. Outline the argument with bullet points. The shorter these are, the better they are. Some people will write entire sentences as their bullet points, but this is a failure. Basically, that's just writing out the argument in bullet form rather than paragraph form. A person who does this will most likey fall into attempting to say the sentences exactly as written in the bullet points and end up exactly as the people mentioned in the paragraph above. An example of good bullet points might be:

The bullet points are memory tags, meant to jog your memory if you pull a blank during your opening. They don't have to make sense to anyone else but you.

After you have done a bullet point outline of your opening, read it over two or three times. Then turn it over, stand up like you are in front of a jury, and deliver the opening from start to finish. Yes, I know it's goofy and you'll probably want to do it when nobody is watching (at least the first time), but how you deliver an opening is as important as what you say during it. Practice things as you intend to do them and it's easier to do them correctly when the time comes.

After you've given it a run through turn the paper back over and look to see if you forgot anything. If you got over 80% of what you put on the sheet out and you did your opening in a coherent fashion, without looking at the paper, you have delivered a solid B+ performance. Practice the opening a few more times and when you get to the point that you are doing the opening with 95% accuracy, without reading from the paper, you are in the A performance range.

Do not let the perfect become the enemy of the good. It is more important to present well than to tell the jury every last fact which you are going to show them. After all, you are going to show them the facts when you present your case - whether you told them about every last fact in your opening or not. By the time you actually do your opening you shouldn't even need that sheet of paper with the bullet points. Remember, every time you look away from the jury to that sheet of paper you are losing repoire points with the jury.

As to the content of your opening statement, that will vary from case to case and situation to situation. A basic rule is to follow the KISS principle: Keep It Simple Stupid. If a group of 8th graders sitting in the jury box wouldn't understand it you have to worry that one or two of the adult jurors might not. In other words if your opening statement includes the phrase "The evidence will establish that the affectation of orthodox antidisestablishmentarianism was a charade belying perfidy of the highest order" you had best be pulling a jury from Yale's faculty or the Curia in Rome. As we all know, you are much more likely to get a jury with homemakers and guys who have retired after 50 years of fixing truck engines. These people aren't necessarily dumb, but their life experience is different than yours. Imagine a physicst explaining loop quantum gravity to you. He'd have to use small words common to both your experiences, because if he used the technical words he used with with other phycists he might as well be reciting the Jabberwocky. The jury's in the same position in relation to you. Use common words and phrases so that everyone understands each other.

Another vital part of the opening statement is deciding format of your opening. Often this is seen as a choice between telling a story or being analytical. However, usually you have to include at least a little of both. A good way for a prosecutor to proceed is to tell the story first - "May 3rd, 2010 was a nice, pleasant, sunny day until Mr. Smith decided he couldn't stand the fact that his neighbor was playing Sweet Home Alabama for the 311th time that morning. Deciding to take action, he grabbed his rapid-firing shotgun and went next door to ask Billy Maloy to turn the music down . . ." - and then follow up with what each witness is going to state - "Officer Greene will tell you that when he arrived on the scene there were bits and pieces of stereo all over the apartment and at least 12 holes in the wall behind the stereo."

If you are a defense attorney sometimes you may want leave the story alone and just focus on the one thing that is the absolute flaw in the prosecutor's case. "Yes, ladies and gentlemen, my client did put 17 solid shot slugs into Mr. Maloy's stereo when Mr. Maloy started to play Sweet Home Alabama for the 327th time that morning. The important difference here is that under the law, if anyone plays Sweet Home Alabama more then 325 times there is an absolute right to destroy all stereo equipment used in the playing to stop the cruel and unusual punishment of innocents - it's called the Sigma Alpha Epsilon exception to the vandalism law. 327, not 311, ladies and gentlemen . . ." However, most of the time you will also want to tell your client's story and follow with some explanation as to how you will prove it.

And with these pearls of wisdom, I send you all out into the world to follow the Lammers' method© of creating an opening statement.


----------
1 I think that TV and movies ignore this because the closing is the dramatic culmination of the trial while the opening is just a step in the drama.

2 I still remember parts of the one I memorized: "Not that I loved Caesar less, but that I loved Rome more . . ."
Author: Ken Lammers on 9/14/2012
Email ThisBlogThis!Share to TwitterShare to FacebookShare to Pinterest