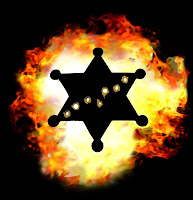 Bo was standing at the side of the road giving a pillhead, with residue from snorting the crushed pill still on her nose, a field sobriety test. The girl was making her third attempt to say the alphabet from C to M when he heard a helicopter flying by. However, it wasn’t enough to distract him from hearing “H, I” pause “K, M, L . . . No, L, M.”

Bo pulled his handcuffs out and told the girl to turn around. Instead, she stuck her breasts in his face and tried to proposition him. It would have been more impressive if she wasn’t so messed up that only about half her words made sense. When Bo put a hand on her right shoulder a sloppy leer came across her face. When Bo spun her around and started applying the cuffs that expression quickly transitioned through shock into rage. Then she started screaming at the top of her lungs, “Queer! Faggot!” That, of course, came out clear as a bell.

About half way to the magistrate’s office the girl stopped yelling and Bo was finally able to think. A helicopter flying by at two-thirty in the morning could only mean one thing. Somebody was being air-evaced from Mount View Hospital to one of the bigger hospitals in Tennessee. That wasn’t too unusual, but Bo hadn’t heard anything over the radio and that was. Almost every air-evac was preceded by a 911 call reporting an accident, an overdose, a rape, a shooting, or something else requiring a deputy as well as an ambulance. Of course, it was always possible that someone came into the hospital thinking they had the flu and turned out to have bubonic plague or something. Not probable, but possible.

The magistrate’s office was colocated with the new dispatch center at the old Starline Bank building on the opposite side of Mount View from the hospital. Bo went straight to the building and told dispatch to call and ask if a nurse would agree to take the woman’s blood so it could be sent to the state lab for analysis of its contents. He already knew they wouldn’t, but he had to make sure the question was asked. Everyone in Virginia theoretically agreed to a blood test just by driving on the road, but after three nurses were subpoenaed to court on the same day all of the nurses were now refusing to draw the blood of intoxicated drivers.

Once the hospital refused to take a blood sample Bo contacted the magistrate. There wasn’t actually a magistrate at the Bartlette County office at night so he had to wait forty minutes before a magistrate in Bristol was able to do a video conference. Thirty minutes of explanation and faxes later, the magistrate faxed Bo a signed warrant for driving under the influence of drugs. Then he had to wait another hour for the van from the jail to arrive and take the girl, who was now almost catatonic, off his hands.

It was well after five when Bo got back in his car. He was driving back through town when he saw lights on at the Sheriff’s Department. In fact, the whole place was lit up. That didn’t usually happen until eight when the daytime staff showed up. He pulled his car into the parking lot behind the courthouse and noticed that it was half full and that the Major’s car was parked in its reserved spot. He parked in the shift leader spot and walked across the street.

Bo used his keycard to get in and past the reception area. Six deputies were sitting around the big table in the ready room; none of them were in uniform.

“Is that him?” An angry voice came from down the hall and Bo turned to see Major Harvey come charging out of his office. “What the fuck are you doing here, you fucking traitor? Get the fuck out! You’re fired!”

Bo stepped back. It wasn’t that he was intimidated by the Major. Greg Harvey was a five foot seven inch skinny guy in his mid-sixties. However, the sheer wave of hate that hit him was overwhelming. He stumbled for something to say.

“Uh, Greg, you can’t fire me. Only the Sheriff can fire me.”

“I’m the Sheriff now, asshole. You killed him so now I’m Sheriff. Get. The. Fuck. Out.”
Author: Ken Lammers on 10/02/2013
Email ThisBlogThis!Share to TwitterShare to FacebookShare to Pinterest