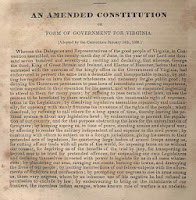 Last Friday, in Starrs v. Commonwealth, the Virginia Supreme Court yet again affirmed that trial courts have the ability to take cases under advisement on their own initiative.

In Starrs, the defendant pled guilty and the trial court found evidence sufficient to convict. The defendant then asked the judge to take the case under advisement for two years and dismiss the case after that two years (assuming no further trouble). The trial court found that while it could continue the case for two years it had no power to dismiss after that two year period. The Virginia Court of Appeals upheld the trial judge, ruling that once facts sufficient for a conviction have been found a trial judge must convict the defendant of the charged offense. Then the case went to the Supreme Court.

The Supreme Court, via Chief Justice Kinser, ruled that facts having been found sufficient for conviction is not the same as judgment. While it is primarily discussing the fact that a defendant's acquiescence via a guilty plea is not judgment, the opinion also specifically states that the finding of guilt by a jury is still subject to judgment from the trial judge. Specifically, the Supreme Court finds that after entering in the record that the defendant has pled guilty a trial court retains "the inherent authority to withhold a finding of guilt, to defer the disposition, and to consider an outcome other than a felony conviction."

There are two interesting points to the Supreme Court's decision. The first is that the Court bypassed all the common law and statutory arguments and rooted this decision in Virginia's Constitution and the courts' inherent powers to judge under the constitution. Once a trial court has entered a judgment of guilt it must follow the laws passed by the General Assembly in sentencing the defendant. However, prior to actual judgment the judge has discretion as to how to decide a case - even if the defendant has admitted guilt.

The second point is that the decision doesn't lock things down entirely. Because this particular case is based upon a guilty plea it leaves open argument that it does not apply in other situations. However, while I am sure the argument will be made, it strikes me as spurious. To begin with, the Supreme Court does note that a judge must render judgment even after a jury has rendered a verdict, although it is not a part of the opinion vital to the decision. Logically, if the judgment isn't rendered until the judge renders it, the manner in which facts are found is not relevant as to the judge's actual inherent power in rendering the judgment.

Conclusion: Having argued for a long time that advisement exists as a common law practice, this decision leaves me a little ambiguous.Where does this leave the statutes which the General Assembly has already passed regulating the use of advisement in particular cases such as misdemeanor property offenses, domestic assault and battery, and drug possession? By definition, these statutes relate to punishment and can only go into effect after the judge finds a defendant guilty. Prior to a finding of guilt the trial judge has the inherent power to take the case under advisement under terms and conditions of his own. This would seem to make the statutes at best a "sense of the General Assembly" or second chance statutes. If the judge refuses to take a case under advisement, the defendant gets a second chance at a deferment of his sentence and possible dismissal of his charge via the direction of the General Assembly.  At worst, this ruling may make these statutes an unconstitutional infringement of the legislature on the courts' inherent constitutional power. This last seems unlikely and my personal opinion is that the courts will basically follow1 the statutes in those places where the General Assembly has laid out how it believes advisement should occur.

We may not have seen the end of litigation concerning this issue, but this case looks like the death knell for arguments against advisement. Short of a change to the Virginia constitution, neither the Court of Appeals nor the General Assembly can directly strip this power from the trial courts. However, I suspect this decision will make the interviews which judges go through before they are (re)appointed by the General Assembly much more interesting.


----------
1.  I say "basically follow" because I have seen so many courtrooms misapply these statutes over the years. They know the statutes are there and they think they are getting it right, but the court has somehow - usually with the best of intentions - fallen into doing things in a manner not authorized by the statute
Author: Ken Lammers on 1/15/2014
Email ThisBlogThis!Share to TwitterShare to FacebookShare to Pinterest