Who Pays the Piper? The Complaining Witness?

§ 19.2-229. When complaining witness required to give security for costs.

For good cause the court may require a complaining witness to give security for the costs and if he fails to do so dismiss the prosecution at his costs.

I tripped across this statute years back and I've always wondered how it was meant to be applied. I looked on Lexis and did not find any annotations and I've never seen a court apply this, so my curiosity was never really satisfied.

Today, while I was researching something else, I finally ran across something that helps explain the statute. Pifer v. Commonwealth, 14 Gratt. 710 (1858) is a Virginia Supreme Court case which has a monograph attached to it explaining who should have to pay what costs. It lays out several cases which put the costs squarely at the feet of the complaining witness if the complaining witness took the charges out herself rather than being required to testify.


A volunteer informer ought to be made a prosecutor, and liable for costs in case of failure; but one who is compelled to be an informer, cannot be considered a prosecutor. Wortham v. Com., 5 Rand. 669; Com. v. Dove, 2 Va. Cas. 29.

And on a trial for a misdemeanor, if the jury find for the defendant, the voluntary informer is liable for the costs, and after verdict the prosecutor cannot show by parol evidence that he was called on by the grand jury, and did not voluntarily give the information.  Com. v. Dove, 2 Va. Cas. 29.

[T]he prosecutor's insolvency or inability to pay costs is, ordinarily, good cause for ruling him to find security for such payment; but if, in the opinion of the court, public justice requires that the prosecution should proceed, it may refuse to dismiss the indictment, though the prosecutor be insolvent, and security for costs be not given.  Com. v. Hill, 9 Leigh 601.

On an indictment for an assault and battery on the voluntary information of the person assaulted, the informer and prosecutor, being the only witness for the prosecution, is a competent witness, though liable for costs in case defendant is acquitted.  Gilliam v. Commonwealth, 4 Leigh 688. 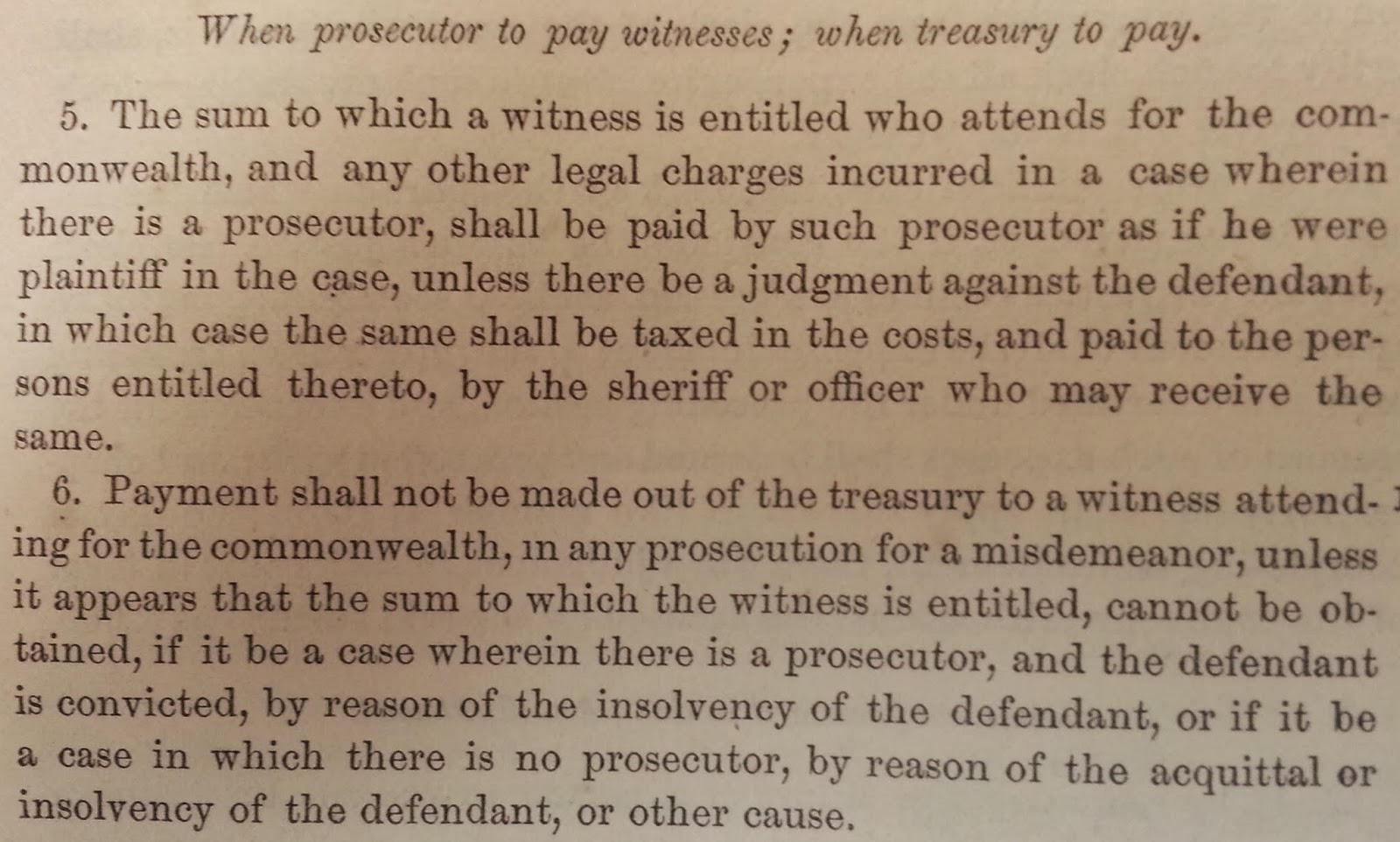 Part 6, supra, is still in the Virginia Code as § 19.2-331 and I think the vast majority of cases in which this applies - and applied - are misdemeanors. There is no reason to think this case law does not apply to the current statute.

Why is this important? Because in Virginia everyone can go and fill out their own complaint and present it to a magistrate, without the participation of a Commonwealth Attorney or police officer. I assume, without having done the research, that some similar process existed back in the 1800's.

I can't find anything in the modern statutes which relieves a volunteer informer / complaining witness of her duty to pay for the prosecution if she loses her case.  If she went voluntarily to the entity (magistrate or grand jury) which issued the warrant or indictment, she is on the hook.  All § 19.2-229 does is allow the judge to require the complaining witness to put the money up ahead of time and if that witness either cannot or refuses to do so dismiss the case and bill the complaining witness for the costs.

In my personal opinion, the "good cause shown" part of the statute limits the class of those whom the judge can apply this statute against. Good cause would probably be the fact that someone is a frequent abuser of the system, filing charges often and then dropping them. This could the person who - at least thrice a year - gets in drunk fights, runs to the magistrate to charge everybody the next day, and then wants to drop it when it goes to court a month later. This could be the merchant who swears out bad check warrants, knowing full well that his employee turnover rate is so great there is no way he can prove 75% of them. Most helpfully, it could be used on counter warrants. These happen when someone charged with an offense herself runs to the magistrate and takes out warrants against those who are witnesses against her in order to muddy the waters.

Still, the amount of proactivity required in order to do this would be prohibitive in almost all cases. Someone would have to search through all the charging papers and cull those which fell afoul of the standards set. On top of that, the judge almost never sees the complaining witness until they show up for trial and therefore could only take the allowed statutory action in the seconds before the trial was set to commence. The only possible working framework I can see for this is if the judge issued a writ of mandamus, requiring a particularly troublesome abuser of the system from coming to court unless she had fulfilled the conditions of § 19.2-229.

Author: Ken Lammers on 2/03/2014
Email ThisBlogThis!Share to TwitterShare to FacebookShare to Pinterest

Have you had any success with using this? Seeing your post, I'm considering trying it out on some of my citizen complaints in JDR, especially Dom. A&B where the complainant comes to the advisement and wants to drop the charges she filed.

No, we've not done this yet. I spend most of my time in Circuit Court where it probably won't come into play often. I have passed this info on to the prosecutors we have in the distric courts and they are considering its use for frequent abusers of the system.

Requiring payment from complaining witnesses is very common in other systems. When I worked in the Middle East, the systems generally required the complaining witness not only to pay lots of fees--but also to initiate (or at least ratify) the prosecution.

As a follow-up:
Since you posted this, our JDR court has started using this and the GDC has said it's willing. We've used it (so far) on a complainant who came to us to say the alleged assault was her fault (the defendant was restraining her from attacking the driver of the car they were in) and on a huge set of cross-complaints where A&S wasn't technically available and where there were an unequal number of charges faced by each side (everyone was willing to drop charges so long as everyone paid the same).

Thanks! It's been a great tool so far, and it saves Virginia a little bit when we use it instead of nolle prossing.