Okay, so there was no post for training day 4 because I was involved in learning some very important facts.

I learned that there is a very nice bowling alley in Williamsburg, AMF Bowling, where I bowled two decent games and one game which shall not be mentioned. 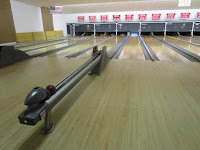 I also learned that Portsmouth has a duckpin bowling alley, Victory Lanes. For those of you who don't know, Duckpin has shorter, squatter pins and uses a ball which is maybe 40% the size of the ball you are used to and has no finger holes. It's a good deal more difficult and therefore you get three throws at the pins each frame. It's also scored differently, but I'll let those of you interested look it up. I played three games, didn't break 100 on any of them, and really enjoyed it.  I wish this version of bowling hadn't died out everywhere except in Northeastern states (and two alleys in Virginia which ain't anywhere near where I live).

Thirdly, I learned there is some sort of weird time dilation effect between Williamsburg and Portsmouth. When I started the drive the gps navigator told me it would be an hour. 10 minutes later it recalculated and told me the drive would be an hour from where I was. 10 minutes after that the gps recalculated and told me it would take an hour from where I was. By the time I got to Victory Lanes it had taken about 95 minutes to do a 60 minute drive (and the drive back took less than an hour so the time dilation effect does not work both ways). Still, it was worth it. Now all I have to do is find some place that has candlestick bowling.

And now  I go off to learn how to do cross examinations.
Author: Ken Lammers on 6/25/2015
Email ThisBlogThis!Share to TwitterShare to FacebookShare to Pinterest