Anonymous commented on my previous post about the social pendulum and how America treats crime (And So the Pendulum Swings) that my position would have been better served if I addressed the competing theories to proactive policing.We skirmished about it in the comments with him pointing to the banning of lead gasoline and paint as correlating with the drop in crime, me not taking that seriously and flippantly pointing out the rise in the prices of beverages in the 90's could be said to correlate as well, and him doubling down with a link to a chart from Mother Jones. Not knowing anybody who trusts Mother Jones for science facts, but not wanting to blow off a point someone seemed to really believe, I contacted someone who know a lot about statistics and now I'm ready to talk about the competing theories.

THEORY ONE: Abortion Legalization Caused the Decline in Crime

This theory was actually one of the ones used to justify the legalization of abortion in the United States. It comes from a Swedish study that followed "unwanted" children and determined that they were likely to engage in crime. The theory, as far as its application to the U.S. goes is that abortion was legalized in the early 70's and therefore the drop in crime in the 90's was due to the drop in unwanted children.

As you might imagine there has been quite a bit of push back against this theory and a hesitancy to actually study it because it has the whiff of eugenics about it and any serious study is probably going to have implications in racial spheres (i.e. claims about Margaret Sanger and abortion rates for African-Americans and Hispanics in NYC ) and few social scientists want to tread on those grounds.

The strongest counter-argument I've seen to this is that it doesn't hold up to actual demographics and the changing social environment. At about the same time as abortion became legal premarital sex and out of wedlock (unwanted) births started becoming normalized. There were actually more out of wedlock births in the lower social classes than there were babies aborted. So, instead of a downturn in crime there should have been an uptick which was somewhat mitigated by the abortion affect.

Personally, I think there's a good chance that a lot of people who push this theory are strongly influenced by confirmation bias. They want the Swedish hypothesis to be proven true because it would show abortion as a long term benefit to society.

This theory states that the US government's banning of the use of lead paint (outside of industrial uses) and requiring its removal as an automotive fuel additive caused people to become less aggressive and led to the downturn in crime. Here's the chart:

.......
Of course, you have to be careful with these kind of charts otherwise you have to believe things like the strong correlation between the Age of Miss America and Heat Murders. 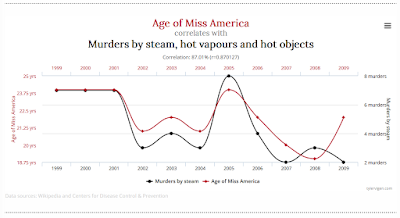 ........
So, I went out and imposed on an old friend who has gone on to make a better man of himself in a career involving a lot of statistical analysis1. He said, in much more erudite words, what I previously stated in the comments on the old post. Correlation cannot prove causation. You can only argue whether correlation shows a stronger or weaker case. As to the case for lead he informs me that it appears likely to have had an effect, but that it is not clear how great the effect was.

On my own, I went out to see how our society compared to some where lead exposure for youths should still be higher. Admittedly, I was looking to see if the US result was predictive in societies with a significantly different cultural base and went to India, Thailand and Egypt to see. In the U.S., the CDC has determined that 5 micrograms per deciliter (μg/dL) of lead in blood is too high. In India it seems that children have about 6.86 μg/dL. In Thailand children have 7.71μg/dL. In Egypt the median is about 17 μg/dL. Assuming the theory that criminal activity tracks with lead contamination Egypt should have the most crime, Thailand and India would follow, and the U.S should have the least.

Obviously lead is not the entire answer. The U.S. has pushed hard to lower lead levels and still has relatively high crime rates. Egypt, which obviously has a lot of continuing lead exposure has a minuscule violent crime rate. If it was entirely about lead or even in great part about lead the United States' crime rates should have cratered by now and should not have stopped their decrease in about 2002.

So, yes there appears to be a correlation that shows some effect. However, higher lead levels do not seem, unto themselves, to cause high crime rates2. I'd really like to see more data on this comparing crime rates for other countries with different cultural bases over time as their lead levels dropped (China, India, Egypt, Indonesia, etc., not European based societies). If a replication of a significant drop could be shown in the crime rates of other societies then this would be a rock solid theory and people much better at math than me might actually be able to determine how much the lowering of lead levels affects criminal behavior. In fact, I must admit to some suspicion as to why there isn't such a study.  If a study of different countries with different societal bases showed similar, significant drops in crime it would be rock solid evidence of the lead theory. Why then does one not exist? Let me put on my tinfoil hat and say maybe it's because a significant reduction in crime rate in other countries did not occur.

Anyway, that's as far as I can take this one. There does seem to be an effect of indeterminate magnitude in the United States.

This is the social group in an area through its shared values and trust of one another cooperating to enforce informally social norms that preclude criminal activity.

This is cited in many places as a counter theory to broken windows policing. While I think it is something that can be a barrier to the entry of crime into an area, I don't think it's something that has effect in an already crime ridden community. In fact, I'd say the underlying purpose of broken windows policing is to create a space and condition so that a positive "collective efficacy" can come into being and flourish.

For instance, after a long period of proactive policing, the police in NYC reduced their activity (we'll assume they didn't just change methods). After they did, the depressed crime rates which came into existence during the proactive policing period remained depressed. Those who opposed proactive policing trumpeted this as proof that broken windows didn't really accomplish anything. In so doing, they ignored one obvious conclusion: proactive policing had changed the social structure so that behaviors were less violent and criminal. The question now becomes, did the social change imprint in the social group deeply enough that collective efficacy can hold the line against a slide back into a crime ridden society? We won't know for years, but my bet would be that in some neighborhoods it will and in others it will fail. Where the final balance will lay probably won't be known until a couple decades have passed and somebody does a historical study.

This is the "a rising tide lifts all boats" theory. Of course, this has some merit, but I wonder how much in an economically depressed area. If half the people in an area are on welfare, the area is flooded with dealers and gangs who constantly have gunfights over turf, and there is one gas station and one McDonalds, how is that community going to grow itself economically out of that situation even in times of booming growth? Sure, some people will get jobs outside the community - if they've got reliable transportation - but enough to transform the entire community? Unlikely. At least it's unlikely as long as no businesses or factories open up near the community and that's unlikely as long as the perception that the neighborhood is dangerous and crime ridden persists. Thus the economic improvement theory finds itself in a catch 22. Crime keeps businesses away and businesses are needed to bring people's economic status to the point that crime is squeezed out socially.

Here again, part of the purpose of proactive policing is to damp down crime so that these neighborhoods can become acceptable (and hopefully desirable) places for businesses to locate and then that tide can actually lift everyone in the community by providing employment for significant numbers of people.

Let's admit something here. Nothing in the real world occurs in a vacuum. Proactive policing may be - and I would assert is - the major element in the decrease of crime since the early nineties, but it didn't stand alone. It is intertwined with the other things listed above with the probable exclusion of the abortion theory. And yes, I am including the lead reduction theory in that statement; I'm still skeptical and want to see the replication I called for above, but as far as I've been able confirm it has some effect.

None of these things are the only cause. They are all part of a set of circumstances which combined to drop crime rates. The question becomes, what was the primary cause? As always, it's impossible to prove with certainty any of this. Someone will always challenge; after all people have to earn their doctorates, get jobs as professors, and become tenured. That process doesn't tend to favor someone who just says "Yeah, the obvious answer is the right one." Thus someone will always be developing new, strange, and attenuated theories and swearing they're the one who is correct.

What is that most likely answer which they'll be striving to make their bones by disproving? The most likely answer is that proactive policing provided a break from prior patterns of social behavior and perception, apparently at such a time as lead reduction had caused younger adults to become less aggressive and thus more likely to conform to new behavioral patterns. This allowed more economic growth in previously inaccessible neighborhoods and allowed room for a new pattern of accepted social behavior to develop.

We'll call this Addendum A to the Ken's Grand Unified Theory of Broken Windows.

1 And, no, I shan't be giving you a name or firm employed at. There are too many whackadoodles on the web and he's done nothing to deserve their attention.

2 Obviously and admittedly, this is a terrible model. I don't have the time, resources, or training to do a long term data or metadata analysis. So, I did my best to approximate a snapshot of the data to give a general idea. I invite anyone out there who wants to investigate the cross cultural effects of the reduction of lead on crime to have at it.
Author: Ken Lammers on 4/18/2019
Email ThisBlogThis!Share to TwitterShare to FacebookShare to Pinterest